We had a late, rainy spring and a wet, cool summer, so the shift moving into Autumn is subtle, but the seasons are definitely changing. And although we found mushrooms here and there all summer, the big season for their growth is starting to really happen, as is the best time to work with them to boost immunity for winter.

Shiitake is probably the best known medicinal mushroom we work with, since it is also a popular edible mushroom. Shiitake’s edibility points to its uses as a balanced tonic and nutritive herb, easy and safe to use on a regular basis.

On the more medicinal side, Shiitake is the only natural substance ever proven to reverse HIV infection, and has also shown promise in treating herpes, hepatitis, and the common colds and flus. It’s also antioxidant and detoxifying to many body systems, and our Shiitake Essence is a tasty expression of all this mushroom’s qualities.

Another edible and medicinal mushroom Spagyric is our Maitake Essence, from a mushroom which grows in temperate forests around the world. In Japan and China, Maitake has been used to boost the immune system and regulate metabolism. Modern studies indicate that this mushroom supports healthy blood sugar balance, maintains healthy blood pressure and cholesterol levels, and supports weight loss. Maitake has also shown anti-cancer properties, especially against breast cancer.

Lion’s Mane is a beautiful mushroom that grows in our area, and it’s also easy to grow from kits. This mushrooms starts as a tight, cauliflower-like formation, and then trails out into long icicle-like shapes when it’s ready to harvest. Lion’s Mane has a delicious lobster or shrimp-like taste and texture, great for pasta and stir fry.

Medicinally, Lion’s Mane is a superior tonic to the nerves and brain tissue, acting as a regenerative to their structure and functions. Used to both support healthy cognitive function, and to heal the damage from injury and illness, Lion’s Mane has become more famous lately because of its use in the “Stamets Stack” nootropic combination of psilocybin, Lion’s Mane and Niacin.

Our Lion’s Mane Spiritualized Essence is a really interesting brain tonic, having a very intelligent and balanced action. It can be enlivening and stimulating to the mind, but can also act to calm nerves and quiet thought, depending on the direction needed.

Agaricus blazei is a mushroom on the more medicinal side of the food-medicine continuum, but if you do find fresh ones, they are delicious. They’re large and meaty like a portobello, but with an interesting toasted almond taste. That nutty note, along with the usual deep forest funk that most mushrooms have, is there in our Agaricus blazei Spiritualized Essence.

Agaricus b. has the widest array of immune-boosting constituents of any mushroom, and outperformed all other tested mushrooms in treating a variety of cancers. Our Spiritualized Essence of it is an uplifting energy tonic, boosting vitality and strengthening the Wei Qi. 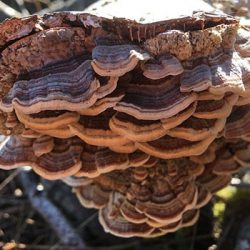 Turkey Tail is another mushroom that is plentiful in our area, colourfully colonizing any cut piece of wood it finds, as I wrote in this article. Its elegant fans with stripes of tan, beige, and brown really do look like the tail of a proud Tom turkey, fanning out from the wood they eat and digest into rich forest soil.

As they break down the lignins in the wood, they transform them into polysaccharides, a sugar-based family of molecules that carry the healing properties of most tonic herbs and fungi. These constituents are balanced in their action, acting as adaptogens to nudge the body back to center and a healthy state, and our Turkey Tail Spiritualized Essence has been a good ally for many in need of this healing.

As with most medicinal mushrooms, Turkey Tail has also been used to treat cancer, both to fight it directly and to ameliorate the side effects of conventional treatments. For this and other long-term healing work, it combines well with Astragalus root.

Cordyceps is a strange and interesting fungal being- it is a fungus that takes over dormant insects, growing through their bodies and controlling their behaviour in order to position its fruiting so that its spores are spread as far as possible and the cycle can continue. Besides its zombie-movie lifestyle, Cordyceps is famous as a respiratory and energy tonic, and both our Essence and Spiritualized Essence carry this intelligence.

Cordyceps has been shown to improve oxygen uptake by the lungs, and also make the transport of oxygen through the body more efficient. This makes it an excellent ally for both short- and long-term respiratory imbalances, from flu and bronchitis to asthma and COPD. It is also a powerful immune booster and adaptogen, helping the overall function of the whole body as it heals the lungs.

Our Cordyceps Essence is made from rice-grown fungus, which is more economical and also vegan, and it is a relaxing, opening tonic to the breath and body. It brings calm to the overstimulated and restricted breathing that can happen with anxiety and asthma attacks, and it uplifts the mood at the same time.

Our Cordyceps Spiritualized Essence is made from the more traditional caterpillar and fungus combination, which we find has a stronger energy of vitality, immune defense, and transformation of illness and imbalance.

Our final Fungal Friends are less well-known, and often used in formulas, but we enjoy making Spagyrics of single herbs to let each one express itself as an individual, and to allow you to create your own regimens.

Chaga is a crusty black fungus that forms on birch trees, widely consumed in Northern Europe and Russia, and associated with lower instances of cancer in societies where it is used. It is an ancient ally to human health, known since at least the time of the frozen Neolithic man known as the “ice man”, who carried it in his kit.

Chaga has also shown strong cancer preventative and treatment effects, along with anti-infective properties. Chaga is especially tonic to the liver, and we find our Chaga Spiritualized Essence to be an energy and mood lifter, as well.

Finally, Birch Polypore is one of humankind’s oldest fungal allies, also found in the kit of the ice man. It is thought he carried it as a remedy for the intestinal parasites he had, which is interesting given that Birch Polypore is itself a parasite of the Birch tree that supports it.

Birch Polypore is anti-inflammatory, and especially to the skin, repairing damage to the tissues and preventing further damage through antioxidant properties. In many studies, extracts of Birch Polypore have been shown to be antibacterial, antifungal, antiviral, and protective to neural tissue. We find our Birch Polypore Spiritualized Essence to be uplifting and mentally energizing, and for specifically boosting mental and neural health, it combines well with Lion’s Mane.