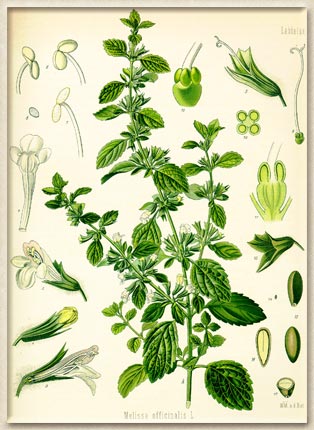 Our new Spiritualized Essence of Melissa just came out of circulation, and it is a very lovely expression of Paracelsus’ favourite plant.

We’ve often described the Melissa Magistery as being like a fat, happy baby, bouncing with joy and laughter, and it is very helpful for babies (and adults!) who need to be in that space rather than some less jovial one.

The Melissa Spiritualized Essence is also lighthearted and joyous, but in a less expansive and rambunctious way. This Jupiter is more constrained in energy, less about expanding the self outwards and more about the wisdom of temperance in one’s efforts and energies.

In astrology, Jupiter rules some very serious qualities along with his better-known joviality; functions such as judgement, prudence, balance, and truth fall under his governance. This new Melissa Spagyric seems to work with these qualities, and carries a strong energy of judicious insight, righteousness, and the grand vision of optimism.

Medicinally, Melissa is a very powerful antiviral herb, and is one of the few herbal medicines that has shown effects against both types of herpes, as well as chicken pox. Melissa is also an excellent painkiller, especially helping with nerve pain; this, along with its soothing effects on the mind and mood, make it an excellent treatment for these viruses and many others.

Click here to buy our new Melissa Spiritualized Essence, or read this article for more about our Melissa Magistery and its vibrant and jovial energy.