Recently, I was talking with some friends on Facebook and the topic of natural antidepressants came up. Someone asked what I thought was the best herbal antidepressant, and, complex topic that this is, my answer was “it depends . . .”. There are many herbs which can balance our moods- uplift a depressed state, calm an anxious state- but which one is “best” for any specific person or situation depends on a few factors. From there, the discussion went in so many interesting directions that it started to look like a really good article, and as more people contacted me with the same question, it also seemed like a great idea for a sale.

My favourite Spagyric for the depressive side of things, and the one we most often suggest, is Tibetan Rhodiola. This is an herb of the high mountainous regions of Tibet, where it has a long tradition of use by monks to support their energy and stamina for strenuous meditations and rituals, as well as the general stress of living in such a harsh environment. In more ancient times, Rhodiola was also considered a magical herb, used by warrior monks to see into the future and avoid strikes in battle.

That aspect might not seem applicable to depression, but it is, especially when we tie in modern knowledge about Rhodiola’s effects. Unlike other antidepressant herbs or pharmaceuticals, Rhodiola does not act primarily on serotonin, but rather on the endorphins. Endorphins are our bodies’ own version of opioids, and like them, they relieve pain and bring feelings of peace and euphoria. You will be familiar with the effects of endorphins if you’ve ever experienced “runner’s high” from strenuous exercise, or the relaxed bliss that a really spicy meal can create.

It’s a positive, bright but relaxed state of being, and when we combine it with the divinatory intelligence of Rhodiola’s spiritual uses, we have an herb that helps us see positive change ahead of us, and to believe that better things are possible for the future. It’s why we recommend our Rhodiola Initiatic for the beginning of almost any path of growth, as it seems to bring the realization of goals to the present in a tangible and optimistic way, the first step in moving towards better mental and spiritual health.

For help sticking to that path, especially if the changes being made are difficult, the Chinese medicinal root Polygala can be a good support. In TCM, this herb’s name means “will strengthener”, as it is said to support the Will of a person who uses it to change old habits, develop new healthy ones, or otherwise work to improve themselves. It is calming to the mind, but in a clarifying way, and it can also be used to support dreamwork for visioning and manifesting positive change.

We’ve seen our Polygala Spiritualized Essence used to support addiction recovery, better eating and new exercise regimens, and many more goals that are worthy but difficult to stick to. It’s also a tonic to the Shen, the energy of calm strength that resides in the heart, which we will discuss more in a bit.

On the topic of quitting old habits, our Oatstraw Essence has helped countless people move on from smoking and unhealthy drinking, and releasing these habits is an important first step in finding emotional balance. And, independent of addiction recovery, Oatstraw is a gentle, balanced tonic to the nervous system, both in structure and function. It is mildly calming, while also very nutritive to the tissues that make up the nerves, and it can be used in small doses throughout the day and night to keep jitters at bay, as well as to relieve all sorts of tension.

A final Spagyric for support of recovery, as well as general emotional health, is our Mulungu Spiritualized Essence. This is a stronger calmative than Oatstraw, acting on the mind to ease anxiety and worry, and in the body to lower blood pressure. It is anti-inflammatory and a painkiller, and can help with sleep, especially if worry or pain are interrupting rest. It also eases the withdrawal symptoms from many substances as new, healthy habits are being formed.

Moving deeper into calm and serenity, Passionflower and Valerian are classic herbs to bring a quiet mind, relaxed body, and steady mood. 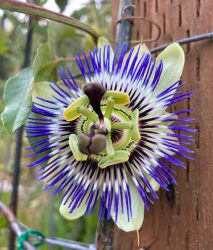 Passionflower, which we grow for its medicine as well as its outrageous beauty, acts strongly on the body. It is a reliable anti-spasmodic and muscle relaxant, easing cramping and tension throughout the physical level, from tight shoulders to nervous stomachs. As it releases physical tension, it also lowers blood pressure, and that, in turn, calms the mind and reduces the feedback loop between mental and physical tension.

Passionflower is also an MAO inhibitor, acting on the brain’s neurotransmitters and increasing levels of serotonin, dopamine, and norepinephrine. What this means in practice is that, as it relaxes the body and mind, it also creates an uplifted emotional state which many customers have describes as a wave of bliss. Depending on dosage, our Passionflower Initiatic can be used to uplift the mind from worries and relax the body for less anxiety and tension during the day, or as a support to sleep.

This peaceful uplift is also an interesting effect in light of Passionflower’s use as an entheogen in regions of South America where the Caapi vine doesn’t grow. It’s action is not as strong when used as an Ayahuasca adjunct, but it can be very helpful for journeys into difficult issues, as its tension-relieving properties also extend to psychological resistance, opening the mind and heart to the experience and lessening fear.

Note that Passionflower should not be used by anyone taking pharmaceuticals which affect neurotransmitters, or in conjunction with other mood-effecting substances.

For more mind-oriented relaxing effects, our Northwest Valerian Spiritualized Essence is a lovely expression of this local herb. If you’re only familiar with the more widely used European Valerian, you might be surprised at the mental clarity our native variety gives, and we find that it has a very balanced intelligence and is useful for many more issues than its sedative Old World cousin.

Northwestern Valerian seems to be most helpful for people who become mentally muddled by stress, with minds that race and fret from the agitation. This is often also accompanied by a paradoxical decrease in other functions, such as slowed or weak cardiovascular energy, sluggish digestion, and shallow breathing. This funky tasting root quiets the overactive mind, clarifying and sharpening thought, while at the same time regulating the body’s functions so that the physical self is strong and steady.

To further support the balance of the adrenal system and its optimal functioning, a good companion to our local Valerian is our Ashwagandha Essence. This Ayurvedic tonic root is one of the most balanced tonics we work with, strengthening nearly all vital functions, while also calming the adrenal system and defending it from the damages of chronic stress. It is considered a high-level rejuvenative to body and mind, more suited to our modern lives than more stimulating tonics like Ginseng.

The way that we describe the perfect Ashwagandha moment is the feeling of being “tired and wired”; that is, jittery and overamped on the surface, but behind that, depleted of real energy and empty of vitality. Taken as a daily tonic, Ashwagandha rebuilds healthy energy reserves and response, and if taken at bedtime, our Essence can also improve sleep quality and duration over time.

If you do feel that you need a more energizing tonic for hard physical work, long days, or just increased energy, our Siberian Ginseng Essence is a good choice. Like Ashwagandha, Siberian Ginseng is an adaptogen, meaning it has non-specific actions to help you adapt to all kinds of stresses and demands. It is also uplifting to the mind and mood, and is especially good for those whose depressive states also lead to tiredness and lack of motivation. It is not one to take at night, but it does improve sleep as part of its healing properties, and it is also helpful for anxiety and tension, even as it increases energy and stamina.

Our Here & Now Somalixir also has a balance of calm, steadying energy combined with vitality and uplift, and it’s one that many customers rely on when life has them feeling distracted or ungrounded. It combines Yerba Mate and Gotu Kola for a sharp but clearheaded state, along with Betel Nut, which collects all one’s energy and attention to a solid center. It’s not at all sedating, but very centering, and so it is useful when you need to be present and engaged, but without your mind wasting its energy by scattering to other places or possibilities.

For a bit more calming grounded energy, along with emotional peace, our Shen Somalixir is one of our most popular formulas. As I wrote in this article, Shen is a concept from TCM, describing the state of calm peaceful energy that resides in the heart. Shen is the source and support for the other two treasures, Qi and Jing, but it is easily disturbed by stress, illness, lack of sleep, and the demands of daily life.

True Shen tonics are not sedatives, but rather, they build your ability to remain calm and strong no matter what happens around you. We think of them as adaptogens for the emotional self- easing tension and worry if that’s needed, or uplifting depressed states if that is the issue. Our Shen Somalixir combines solidifying Dragon Bone and our Earth Magistery with Spagyrics of Amber for protection from others’ energies.

We also offer several types of Amber as single Spagyrics, with the most versatile being our Baltic Amber. This special Spagyric of the 40 million year old fossil resin is a beautiful expression of ancient plant intelligence. It is protective, building a sphere of electric energy around you which allows you to interact with others, but not take on any of their energies or emotional states. This makes it useful for healers and sensitives, or anyone who has a tendency to pick up other peoples “stuff”. 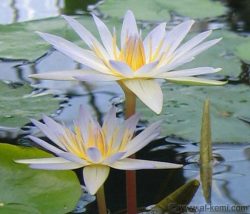 Finally, for those who do wish to be carried on the currents of energy flowing around them, our Waterlilies Somalixir will have you floating like its namesake flowers, open and peaceful.

As I discussed in this post, lotuses and waterlilies are some of my favourite healing plants to work with. They are all powerful expressions of the Lunar energy- watery, deep, dreamy- and when three of them are combined in one formula, it creates an intelligent medicine for spiritual work.

The energy of our Waterlilies is like a deep pond, still on the surface, but with strong undercurrents that can be worked with through practices such as Qi Gong or the Taoist Microcosmic Orbit. It is an especially beginner-friendly formula for energy work, either on its own, or combined with a Magistery to refine its influence to one planetary archetype or chakra. It is also a lovely formula for visioning or dreamwork, or just to bring a buoyant, flowing quality to your day.