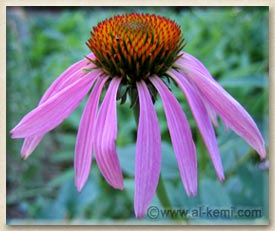 We’ve been busy this Spring, what with setting up our new home and lab, working in our yard, and catching up on all the work we set aside during our move. Somewhere in there, we managed to create two new Spagyrics, and more are on the way.

Our first new Spagyric isn’t a new herb for us, but it is a new expression of the classic herbal immune booster, Purple Coneflower, better-known as Echinacea.

We have worked with Echinacea for many years as an Essence, creating a strong immune-boosting medicine great for fighting off colds and other infections. It’s one of the first Spagyrics we created, and one of the first people recognized in the early days of herbal medicine becoming more accepted. It is still among our bestsellers, and the one we reach for whenever we feel something sneaking up on our immune health.

The roots for this new Spagyric of Echinacea came from a friend’s organic garden in northern California. With the care and love that these plants had received as they grew, we wanted to create something very special to bring out the best intelligence possible.

Our Spagyric Essences, like the original Echinacea, support the physical body, and so the Echinacea Essence is a good choice to respond to short-term, finite assaults like colds and other infections.

For our new Echinacea, we decided that the Spiritualized Essence process would best magnify the healing energies of these older and wiser roots, and target them to a higher level of tonic support for long-term use.

After our months-long Spiritualized Essence process, we are very pleased with this new Echinacea. It has the same “buzzy” mouth numbing effect of the raw root, which comes from its alkylamides, important carriers of Echinacea’s immune-supporting properties. In our new Spiritualized Essence, this buzzing seems to energize the whole system, spreading in a wave of warmth and vitality through the whole body.

Echinacea’s alkylamides have recently been shown to bond to the cannabinoid receptors which modulate inflammation and immune response, especially to cancer. They also express activity on the nervous system, carrying painkilling and calming effects that we have always felt were present in Echinacea. You may have heard Paul recommend Echinacea for a headache and wondered at this uncommon use of the plant, which he came by intuitively, but which makes more sense the more we understand about the plant.

All plants have complex intelligences, able to act on many things, even if we only use them for one or a few effects. Spagyric processing keeps the plant whole on all of its physical and subtle levels of being, allowing the medicine to act in the same adaptive ways as the original plant. This adaptation and balance is especially strong in the Spiritualized Essences, created at the Mercury level of intelligence and life force energy.

This new Echinacea shows how sophisticated these distinctions can be, and how the work in the lab can guide and direct the plant’s innate virtues in a cooperative way, creating powerful and maybe even unexpected healing qualities.

Our next new Spagyric is a formula from our Somalixir line, debuted at last fall’s events, and then further fine-tuned before its inclusion on our store site.

A favourite childhood book of mine was (and remains) the wonder-filled A Wrinkle in Time by Madeleine L’Engle. Written in 1962, it tells the story of the Murry family, especially the children Meg and Charles Wallace, as they search for their father, a missing scientist. Helped by three supernaturally-powerful women, they travel across space and time using “tesseracts”, which are wrinkles in the space-time continuum which allow distant points to come close together.

I was fascinated by the idea of tesseracts, and worked with the concept throughout my childhood. I would imagine a future time, anchored to a place, emotion, idea, or event, and send myself something to retrieve at that time- a feeling, thought, visual signal, or other signpost from myself to myself. It is a practice I continue which I now see connected to ideas such as entelechy and the morphic fields discussed by Rupert Sheldrake.

To create this energy transfer, I imagined time wrinkling the way it is described in the book, and as a child, this was easy. As an adult, it’s harder to believe and harder to achieve, and so I spent some years thinking about what plants could help open that flow more easily.

One obscure plant that jumped out at me was Astrale, used as an adjunct to Ayahuasca. It does not carry the psychedelic chemistry of the Vine, but works to help loosen the ties between the physical and astral bodies so that the main journey can be undertaken.

In my research into this plant, its botanical name, Cecropia, led me to the amazing fact that it is also a primary food for sloths. Now there is a creature that moves through time in a way vastly different than us! This knowledge, and the effect of the Astrale plant in my meditation, gave me the idea that it supports slowing down to speed up, movement that is imperceptible because it is so anchored in stillness. It is movement which is so slow on the physical level that a disconnect between the body and spirit is created, opening the doorway to instant travel on the subtle levels.

Supporting the Astrale, I added Syrian Rue for its stronger disconnecting quality, along with two waterlilies: Mayan and Blue.

Mayan waterlily iconography is seen around the ancient temples in which the calendar was calculated, and modern astrologer friends have reported to us that it is very helpful in the mental projection needed to discern the possible effects of future heavenly events. Blue waterlily was used in Egypt for many of the same works, and has a particular genius for pulling aside the veil of this world and allowing glimpses of other places on other planes of being.

Other herbs support these effects and focus them so as to be controllable, especially if used in conjunction with the classic Shamanic support system of rhythmic sound. Drumming, dancing, or even one’s heartbeat create a pattern into which the consciousness can drop as if through a trap door, guided by the Tesseract- we think you’ll enjoy the journey as much as we do!