Tongkat Ali is an herb from Indonesia and Malaysia, where it is considered an excellent male tonic, increasing libido, performance, and fertility mainly by increasing testosterone.

This would also indicate its use as a muscle building and general endurance tonic, and that is the effect we most noticed in working with it. From our new eroSoma Nectar of Tongkat, we felt a general sense of strength and power, as if any physical task would be easy and enjoyable. To try this Nectar for yourself, click here for its store listing.

Tongkat Ali’s feeling of physical power and confidence is also imbued into our newest Somalixir, Sacred Masculine. We wanted to offer a counterpart to our Divine Feminine, so that the male energy could be called upon and experienced in the same positive and powerful way.

From the Tongkat, Sacred Masculine brings a very centered feeling of power, not aggressive, but calm and contained. We also included Suma, for its energy of determination and stamina, and Devil’s Club, which brings a quality of confidence and leadership. Sacred Masculine can be found here in our store. 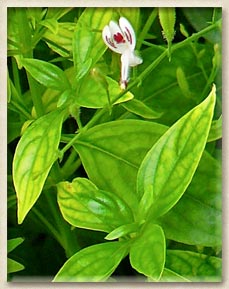 Finally, we have created an Essence of Andrographis, an important immune tonic in Ayurveda and Traditional Chinese Medicine. This herb is used against invasive illnesses of all kinds, from everyday fungal, viral, and bacterial infections, to more serious illnesses such as malaria and typhoid. Modern research has also shown Andrographis to have activity against HIV, herpes, and some cancers.

Our main goal in making this Essence was to add to our Spagyric arsenal against Lyme disease, which is an increasing problem in our area and the West Coast in general. Andrographis acts directly against the spirochetes which cause Lyme disease, and also supports the liver and acts to lessen pain and inflammation.

Andrographis is best used in conjunction with other herbs, such as Japanese Knotweed, Cat’s Claw, and possibly Red Root to counteract some of the rashes and hives that high doses of Andrographis can cause in some people. Click here for our Andrographis Essence, and click here for Stephen Buhner’s excellent book, Healing Lyme.