We’ve been busy in our lab the last few months, creating new Spagyrics of some herbs we’ve long wanted to explore and share with you. There’s a new Vervain Initiatic, which has its own article here, and Spiritualized Essences of Solomon’s Seal and Goat’s Rue.

Solomon’s Seal is a beautiful plant of the deep forests of the world, with white bell-shaped flowers hanging gracefully from arching leafy stalks. The European variety, Polygonatum multiflorum, has a longer history of use, as do many Old World herbs, but our new Spagyric is from the American plant, P. biflorum, which is used in many of the same ways.

This plant’s common name refers to the round scars which form on the rhizomes at each year’s growth limit, as they are said to resemble the magical seal of Solomon, the wise king of the Bible. Solomon used his magickal seal, also known as the Star of David, as a talisman of protection against evil, and this seal is associated with the radiant masculine energy of the Sun, the ruler of this new Spagyric.

Practitioners of Santeria, Hoodoo, and Voudoun know this plant as High John the Conqueror Root, and use it to “conquer” negative attacks, and to direct one’s magickal Will on others in spellcraft.

Herbally, Solomon’s Seal’s uses are seen in the signature of its gnarled and bone-like roots- this plant is a skeletal and structural tonic of amazing intelligence. Both the American and European varieties are revered for their ability to heal broken and damaged bones, tendons, ligaments, joints, vertebrae, and structural soft tissue such as vertebral disks and joint bursa.

The intelligence of this plant is such that it can heal in any direction as needed, in true tonic fashion. So, it will help rebuild the calcium structure of a broken bone, but it has also been used to break down inappropriate calcium buildup such as bone spurs. In the same way, whether connective structures, such as tendons and ligaments, are overstretched and too loose, or damaged, tense, and tight, it restores the proper, balanced amount of stability and flexibility, also easing inflammation and pain.

In our tasting of the new Spiritualized Essence of Solomon’s Seal, we felt its effects on the connective and structural tissues, as well as a strong overall tonic effect. The raw root and the Spagyric both have a sweet, nutritive taste of polysaccharides, similar to American Ginseng and other medicinal roots, and bring instant feelings of strength and energy.

I felt more solid, straight, and aligned after taking it, and very aware of the triangle of stability created by my hips and spine. At the same time, the energy was not heavy or too downward, but opening, as if space had been created between my body’s many joints and connections.

Paul reported waves of energy coming in through his breath, almost like Cordyceps’ effects, and a charge in the throat, solar plexus, and Jade Pillow. We both felt relaxed and loose, while at the same time strong and steady.

We are working on a formula using Solomon’s Seal, which we will have in a few weeks, but for now, we invite you to try some on its own, and we think it would combine very well with Eucommia for connective tissue strength and Jing tonic effects, and with our Siberian Solomon’s Seal and Prince Ginseng for overall balance and energy. 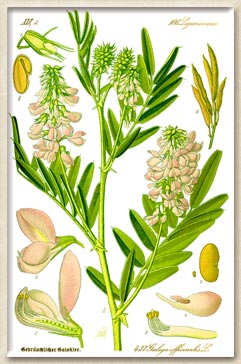 Goat’s Rue, Galega officinalis, is a rangy but pretty member of the pea family, with pink to purple flowers and seed pods typical of its relatives. It is not a very well-known herb outside of herbal healing circles, as its uses are narrow, but it is very useful for its two main virtues: increasing milk supply and lowering blood sugar (an interesting combination of effects shared by another pea family plant, Fenugreek).

It had long been observed that in cows grazing on the herb, Goat’s Rue increased milk supply by as much as 50%, and this herb has been used since ancient times to help human mothers better feed their babies, as well. Like other milk-boosting herbs, Goat’s Rue also has a generally beneficial effect on breast health.

The blood sugar lowering effects of Goat’s Rue have been known since the middle ages, and have been widely studied in modern herbal healing. Research into the chemistry of Goat’s Rue led to a better understanding of insulin resistance, one component of diabetes’ effects on blood sugar.

Extracts of this herb were shown to improve insulin resistance, and so allow the muscles to better utilize glucose, leading to a lower amount of glucose in the blood and a lessening of complications from high blood sugar. This research also led to the discovery of an important class of diabetes pharmaceuticals, including metformin, which is still in wide use today. These drugs can be lifesaving, and should not be discontinued without close physician supervision, but they do have negative side effects, and so the more natural plant Spagyric was something we felt was worth making as an alternative.

As with so many herbs vs. pharmaceutical questions, our research indicates that the whole plant acts in much more well-rounded and intelligent ways than an isolated or synthesized chemical, and this is also the case with Goat’s Rue. Its action is in several key metabolic areas of importance to blood sugar control: decreasing insulin resistance, as discussed above, but also decreasing the absorption of glucose from food in the digestive system, and reducing glucose formation in the liver.

Because of this balanced action, particularly tonic to the liver’s “judgement” capacity, we created our Spiritualized Essence of Goat’s Rue under the rulership of Jupiter, and we have high hopes for its helpfulness singly, and in formulas we have planned around it.

As with any other serious chronic illness, diabetics should be very careful adjusting medicines or trying new treatments, and should work with a physician for the transition period, as too-low blood sugar can occur with Goat’s Rue, and this can be life-threatening.