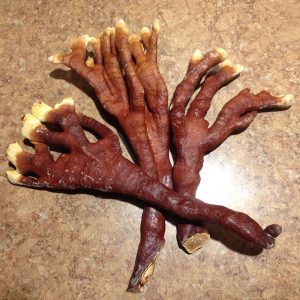 Reishi mushroom is so honoured in Chinese medicine and culture that in nearly all ancient paintings and woodcuts any person considered wise, healthy, or long-lived is shown holding a Reishi. As a deep Qi tonic, it has an amazingly diverse spectrum of healing and balancing effects, and is considered one of the premier tonic herbs.

Like Ginseng, Reishi is considered an adaptogen, that is, an herb which balances and modulates the body?s actions and responses in whatever direction is needed. Some of the systems and functions to which this normalizing effect is applied are blood pressure and circulation, the immune system, blood sugar levels, heart function, the nervous system, allergic response, digestion, and all major internal organs.

It is a powerful cleansing tonic, anti-oxidant, and immune stimulant, and has been used with great success in cases of cancer, AIDS, and other degenerative diseases, to both stimulate the expulsion of the disease-causing agents and to help the body fight off their return. Its cleansing action is also used in cases of poisoning, from chemicals, food, metals, and poisonous plants. We have been rescued by Reishi a few times when we absorbed too much heavy metals in our lab work.

As a Spagyric Spiritualized Essence, Reishi is an excellent long-term tonic, energizing and uplifting, and very balancing to mental and emotional health. Reishi supports the peaceful state of calm strength referred to as Shen in Traditional Chinese Medicine, and protects the spirit and breath during Taoist Embryonic Breath practice.

The same Reishi spores can grow into two completely different forms, depending on condition. Antler Reishi looks like a bright red lacquered deer antler, and is a stronger energy booster and Qi tonic/protective than the more immune-oriented Duanwood Reishi.

Be the first to review “Antler Reishi” Cancel reply