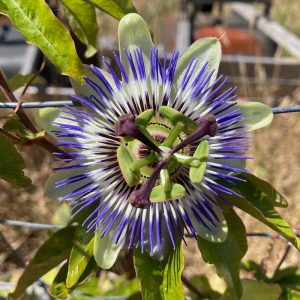 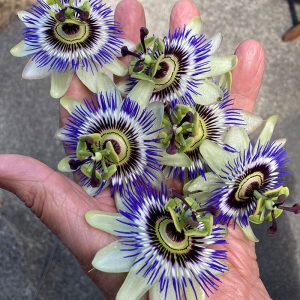 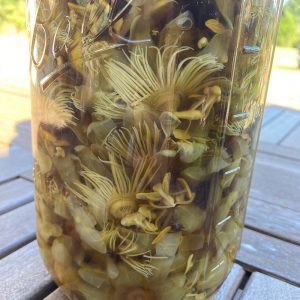 This is the second vintage we’ve made of fresh Passionflowers, collected from our own vine over the course of several years. One by one we added them to the extraction, and when it was finally strong enough, we followed the rest of our spiritualization process to create an Alchymical Initiatic.

This vintage has a different energy than the last fresh flower batch- it’s more heavy in the body and releasing to the physical self. Working with it was as if a heavy, dark blue curtain dropped across awareness, darkening the perception and stilling the mind. When the curtain lifted again, perceptions and movements seemed to be slowed to a plant’s pace, with graceful and purposeful movements.

It brought awareness of a different type of movement- the watery flow of plant gestures, different than the sharp, jerky muscle movement of the animal realm. The bright, fast, loud animal world receded, and the steady curved movements of plants stepped forward. This shift brought with it an awareness of the power of the spiral, seen in the Passion vine’s tendrils, which coil like a spring to hold and climb.

These spirals build on themselves energetically, coiling up the pure energy of sunlight into the DNA of plant intelligence and power. The power of plants is in their water, and their ability to move by relaxing- this is the gift of the Passionflower.

This Initiatic would make a good support for Yoga and Tai Qi, or any practice in which vitality and force are built by deliberate, cyclical movements. It is very relaxing, even sedative, and I also found it wonderful for connecting to plant energies through dreamwork or deep meditation.

We have not explored this one as an Ayahuasca analogue or additive, but it is still an MAOI, and so has all the properties and cautions that go with that chemistry.

Be the first to review “Passionflower – Fresh Flowers 2022” Cancel reply