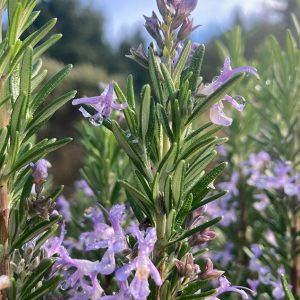 In an ancient poetic sense, Rosemary has long been called the “herb of memory”. Recent studies have found more than a dozen anti-oxidant compounds, most of which collect in the tissue of the brain, preventing inflammation, stimulating circulation, and generally benefiting the mental functions.

Rosemary may even help slow the breakdown of acetylcholine, a degeneration related to Alzheimer’s disease. As a cooking herb, it is used for is warming, digestive stimulating properties, and is cleansing to the whole body.

As a Spagyric Spiritualized Essence, Rosemary is very stimulating to the mind and thought, and is popular with students. It is also the most bitter Rosemary Spagyric, and so probably the most stimulating and tonic to the liver.

Also available as a Spagyric Essence for Physical Support, used as a warming and stimulating digestive and circulatory tonic, and as a Spagyric Magistery for Soul Level Balance, which is more cheering, uplifting, and warming.

Be the first to review “Rosemary” Cancel reply