Salt : the Body of Spagyrics

Our new Seaweed Spagyric led us to do more research into the mineral aspect of healing plants, studying it from an herbal perspective as well as working out how to best bring the mineral content of plants into Spagyric medicines. This got us thinking about the Salt level of being in Spagyric work, and wanting to explain it in more detail as the start of a series on the three levels of being.

Salt, Mercury, and Sulfur are the three basic principles in Spagyric work, and though they are not the same as the common substances of the same names, they share characteristics with literal sodium chloride, quicksilver, and yellow sulfur crystals.

Spagyrically, Salt, Mercury and Sulfur are the inner makeup created by the growth of a plant in Nature, as well as the three constituents that we work with in our lab. This three-fold nature was originally explored by Paracelsus as part of his efforts to make Alchemy more of a healing discipline, useful for understanding disease and making specific medicines.

Paracelsus created both the practice and the term for this new synergy of Alchemy and healing: Spagyrics. Whereas Alchemy works primarily with the four elements of Earth, Water, Air, and Fire, separating them from mostly mineral subjects to change their nature, Spagyrics works with the three principles of Salt, Mercury, and Sulfur to create medicines for body, spirit, and soul.

Salt, the level of the body, was first discovered as a principle by Paracelsus; previous discussions of the inner nature of plants in Alchemy discussed only Mercury and Sulfur. The addition of an idea of the body of a plant, and hence, patient, is an obvious necessity for medicine, since the body is where medicine is practiced.

Paracelsus described Salt as the principle of physicality, fixity, and preservation, and as the container of form that holds the subtle principles together as a whole, living being. Without the two higher principles, the body is dead and inert, but without the body, spirit and soul have no home and cannot act in the world.

In plants, the Salt principle resides in the minerals and structural tissues, it is the “plant” as we see it with our vision, green, with leaves, a stem, and a physical presence. Salt is the easiest principle to understand in plants, since it is the plant and consists of the nutritional and chemical attributes that most systems of herbal medicine rely on for healing.

It is somewhat ironic, though, that chemistry-oriented herbalism focuses only on the physical attributes of herbs as the source of healing effects, although conventional tincturing is very poor at extracting these constituents. Plant minerals in particular are not extracted by alcohol, and so a conventional tincture of nettles or horsetail is actually nearly devoid of the minerals that are part of those plants’ healing gifts.

Some herbal companies know this and offer vinegar extractions as a way of obtaining the minerals, but vinegar changes plant minerals into acetate compounds, which can be useful or not depending on the mineral, but are in any case not what the plant created as its healing Salt level.

In our lab, we follow Paracelsus’ methods and our own process to create salts from all the plants we work with, so that the higher aspects of life force and intelligence will be locked in to the final medicine and able to interact with our physical and subtle selves.

Even though all our Spagyrics contain some version of each of the three levels of being, the types and qualities of the plant salts vary according to the level of Spagyric we are making, which depends in turn on what level of being the eventual Spagyric is to work on. All Spagyrics need to have some form of Salt, Mercury, and Sulfur to be whole and true Spagyrics, but each of those levels can also be specifically refined and concentrated to target the medicine to body, spirit, or soul. This refinement of the Spagyric process, based on Paracelsus work and allowing targeting of healing efforts, is unique to our Spagyrics, and is something we have developed over our years of practice. 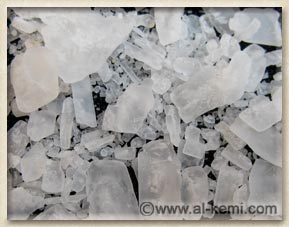 When we focus on the Salt level of extraction, working with refinement of a plant’s mineral and crystalline constituents, we create a Spagyric Essence, targeted to the physical level of being.

Plant salts created for this level, like the Melissa salts shown at left, carry the minerals of the plant in a purified but not chemically-altered form, in the natural colloidal state that the plant created as it digested the soil’s metallic minerals into oligo-minerals which we can absorb.

These minerals, along with the plant’s oligo-alkaloids, are extracted in our Essence process in a method specific to this level of processing, and are part of the targeted refinement that makes our Essences different than Spiritualized Essences or Magisteries. It should also be noted that the Salts we are extracting are purified and crystalline, following Paracelsus’ writings, and are much more refined than the ash and charcoal included as the “salt” level in mass-market spagyrics.

One proof of the efficiency of our Spagyric extraction of Salt as plant minerals can be seen by comparing the amount of salts obtained from different plants. Mineral-rich herbs like nettles, horsetail, and alfalfa give large amounts of Salt, while herbs not known as mineralizers, like lavender or tulsi, give very small amounts.

This shows us something of the essential nature of the plant, and helps us understand which level of Spagyric will best represent its healing intelligence. In the case of lavender, a rich essential oil plant, a Sulfur-level Spagyric focusing on its essential oil soul will carry the healing it is best at, while tulsi has qualities that can be made into a Mercury and spirit-filled Spagyric, or a Sulfur-level Magistery.

Some of this understanding can be gained by study of the traditional healing uses of a plant, and whether it is usually used for simple physical ailments, as a long-term tonic, for psychological imbalances, or as a spiritual aid. Historical and materia medica research points out some of the plant’s balance of action at each level of being, but then it is up to the art and skill of the Spagyric’s maker to interpret and guide that balance.

This knowledge of each plant and its level of intelligent healing action is the reason we don’t offer every plant we work with at every level of Spagyric, but it is also why we do offer many plants at more than one level. Every new plant we work with is another chance to learn from Nature, and to gain more of the kind of insight into our Art that only comes from experience.

As always, we hope that this experience continues to support our community, and we invite you read the next articles in this series, about the Mercury level of Spirit and the Soul level of Sulfur.

5 thoughts on “Salt : the Body of Spagyrics”