In the first part of this article, we talked about some Spagyrics that we create at different levels to magnify the specific healing gifts each root offers. In this article, we will discuss the rest of this sale’s collection- some leaves, a mushroom, and a bit of bark. Click here to go right to our sale page, or read on for more information.

Our first leaf is a lovely one, and is so complex medicinally that we offer three different Spagyrics based on it- Ginkgo in one Essence and two Spiritualized. 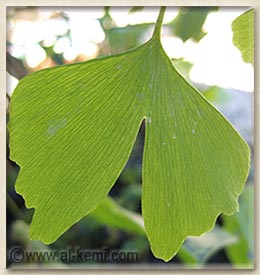 This remarkable tree, with its elegant fan-shaped leaves, is a real survivor, having existed on our planet for 270 million years. This species has survived ice ages, worldwide climate change, and individual specimens in Japan have even survived nuclear war.

Toughness and longevity are the signature of this tree and its medicine, which can be targeted and refined in effect through Spagyric processing.

Our Ginkgo Essence is made from the green leaves, and is supportive to circulation, especially to the brain, as well as to the genitals. It thins the blood, and so should be used with caution by some people, but that property can have an invigorating effect in the mind, as well as being balancing to the blood pressure and heart health.

On the Spiritualized Essence level, we make two Ginkgo Spagyrics.

The first one we created was from green, summer Ginkgo leaves, as with the Essence. This Spiritualized Essence is very enlivening to the mind, thought, memory, and alertness, both in the short- and long-term. It has the most stimulating effect on the brain’s chemistry, and often lifts mood along with quickening thought. It is an excellent tonic for aging well and with cheer and sharpness.

Our Autumn Ginkgo Spiritualized Essence is a newer Spagyric, created after Paul was looking for a brain tonic that had some of the gifts of Ginkgo, but with less of the jittery feel it can create in some people.

The yellow leaves of Ginkgo gathered in the fall are lower in the stimulant terpenoids, but higher in the flavonoids that create the golden hue, and so Autumn Ginkgo is a stronger anti-oxidant and protective to the brain and nerve tissue. This Spagyric works more long-term to build mental health and brain function, and is well-tolerated by many people who tell us the green is too stimulating for them.

From the mountainous regions of southeast Asia, our next tonic herb is locally called “magic grass” and “poor man’s Ginseng”. It is revered as a very balanced tonic with complex directional actions, and shares some of Ginseng’s adaptogenic chemistry.

Gynostemma is a very bitter leaf, and that taste and its related effects are prominent aspects of our Spagyric Essence. Bitter taste is connected to the function of the liver and digestion, and Gynostemma is quite stimulating to both. At the same time, it is balancing in whatever direction is needed, increasing or decreasing weight as needed, and acting on glucose metabolism in a similarly intelligent way.

As a Spiritualized Essence, Gynostemma is a good long-term tonic, with a more Yang and stimulating energy, useful for sluggishness of the body, mind, or mood. This level is helpful for supporting exercise and hard physical work, and helps vitality recover quickly from such stresses.

One last tonic from Chinese medicine is a very special healing being, although it’s not a plant- Reishi Mushroom. This beautiful shelf fungus is revered to a mythical degree in Traditional Chinese Medicine, where it is considered the most powerful herb for longevity, even immortality.

Depicted in artwork and used as a tonic for millennia, Reishi contains a very complex array of adaptogenic chemicals, along with a wise intelligence that directs them to nearly any system, imbalance, or need.

Our Essence of Reishi carries its cleansing properties, and is a Spagyric we rely on when we are doing metal or mineral work, or whenever we’re feeling “invaded” by infection, illness, or toxicity. This level of Reishi also has a strong and quick immune-boosting action, and like all medicinal mushrooms, its constituents match our own immune defenses in ways that can be more balanced than plant-based immune stimulants.

On the higher level, we create a Spiritualized Essence from the very special Antler Reishi. As we wrote a few years ago, this is a much more rare form of the mushroom than the more common shelf shape, and it has a different energy and healing properties because of its distinctiveness.

Antler Reishi forms in response to particular environmental conditions, growing into a beautiful shiny red antler. It is considered the more Qi protective and boosting form of Reishi, and we find that it creates and holds amazing reserves of vitality, without creating overstimulation or depletion.

This balance is probably because Reishi is also a tonic to the Shen, the peaceful spirit that resides in the heart, and which is the deep source of the other two treasures, Qi and Jing. Balancing Shen along with Qi ensures that wisdom and stability will grow along with energy, and our Antler Reishi Spiritualized Essence is one of the most balanced single herb tonics we offer.

For our final pair of Spagyrics, we jump continents to South America and the Amazon rainforest, home to actual jungle cats and their claws, along with the medicinal vine, Cat’s Claw. So called because of its claw-shaped thorns, the bark of this vine is used by native peoples for a wide variety of ailments. Its sharp appearance hints at its Mars-nature, and it is as a strong immune tonic that it excels. Like a claw, it defends the body against infections, cancers, and inflammation in many body systems.

As a physical level Essence, Cat’s Claw’s antioxidant properties are brought out, making it useful for inflammations and infections from short-term injuries or illness, as well as allergies.

In the Spiritualized Essence Spagyric, Cat’s Claw is a good tonic for the same kinds of imbalances: inflammation, infection, and allergies, but of a more chronic nature for which a stronger extract and life force are needed. Cat’s Claw also contains some chemicals which may interact with some of the neurotransmitter receptors that regulate mood, and a few customers have reported anti-depressant and anti-anxiety effects from this level of Cat’s Claw Spagyric.

We hope this tour of Spagyrics at different levels of being has been interesting- you can find part one of this article here, the whole list of sale Spagyrics in our store, or read more about Essences and Salt level Spagyrics, and Mercury/Spirit Spagyrics.