Talking with a relative recently, the conversation drifted to the cross-cultural nature of so many seasonal celebrations, and how the food traditions of Spring tend towards the ascetic. For Lent, favourite foods are given up all season, and meat is abstained from on Fridays. For Passover, simple unleavened bread is eaten, along with bitter herbs.

These traditions mirror the dietary ebb and flow that agrarian societies would have experienced, with this time of year being the most precarious, as last year’s storage crops start to run out, and the new food crops are months away. Fasting would be a natural consequence of this seasonal shortage, perhaps supplemented by foraged greens, most of which are bitter.

Of course, I am not meaning to glorify the food insecurity that humans struggled with throughout history, and which so many are still unfortunately subject to. But I wonder if the annual cycle of fasting and wild, bitter foods that our ancestors went through had health-boosting effects we can benefit from in a safer way. Looking at the prevalence of diets, cleanses, fasts, and health resets that our culture offers, peaking as New Year’s Resolutions and again as Spring Cleansing, it seems that I am not the only one to make this connection.

After the rich foods of fall and winter, I find myself craving bright, fresh, and bitter foods, finally harvesting the kale taking over my garden, and chewing on handfuls of parsley as I do the weeding. For a little extra boost to my digestion, natural detoxifying processes, and immunity, I also reach for a few Spagyrics this time of year, and since you might be feeling that same energy of emergence from winter, we’ve put some of them on sale.

Starting with bitters, their action can be understood metabolically. Many plant poisons are bitter, and as we evolved as humans (and even before that step), this connection became encoded in our systems. When we taste bitter, ancestral experience tells our bodies that a poison is on the way, and our whole digestive system works to dilute the toxin.

We salivate more, increasing the digestive enzyme content of our mouths, and our stomach becomes more active and acidic. Our liver and gallbladder release bile, itself quite bitter and caustic enough to break down many poisons. Our digestive tract speeds up its action to keep the perceived poison moving along, and everything is quickened and sharpened, top to bottom.

Fortunately, we can use this effect by taking any bitter, no poison necessary, and as long as we spend some time really tasting it, it will have these tonifying effects. We always recommend tasting any of our Spagyrics as part of connecting with them, but with bitters, it is especially important not to dilute them or take them as herbs in capsules.

People have varying tolerances for bitter taste; luckily, there is also wide variation in the bitterness of herbs, so everyone can find one they like and which will help them to heal their “bitter deficiency syndrome”, which herbalist Jim McDonald discusses in this wonderful monograph. 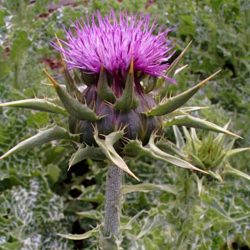 On the mildest side is Milk Thistle, from a family of plants known for its bitterness and liver-healing properties. Milk Thistle is only mildly bitter, and the seeds, which are the most medicinal part, are also a bit nutty and rich tasting, which tempers their bitterness without reducing its healing energy.

The antioxidant constituents in Milk Thistle seed have an affinity for the liver, and studies have shown that they can have stabilizing and rebuilding effects on liver tissue, as well as preventing the binding of toxins to liver cells.

Our Milk Thistle Essence is a good support to ongoing liver and digestive wellness, particularly for those with regular exposure to toxins and poisons, such as industrial workers or mushroom hunters.

It is also a very useful part of healing therapy for recovery from addiction, especially in conjunction with Kudzu Essence to reduce cravings, and our Shen Somalixir to heal the Spirit and bring peacefulness.

Another herb with the classic Jupiter taste combination of richness and bitterness is Turmeric. Widely used as a spice in India and other tropical countries, its bright yellow colour is another planetary signature of Jupiter herbs, and of Jupiter’s organ, the liver.

Turmeric is a medium-strength bitter, but its taste is often disguised by the other herbs in the curries and mixtures it is used in, and even alone, most people don’t find it overwhelming. It is one of Nature’s best anti-inflammatories, acting to reduce swelling in nearly every body tissue and system.

Our Turmeric Essence is a very effective Spagyric for indigestion and stomach upset, especially of the short-term and limited kind. We can’t count the number of people it has helped at festivals, when unfamiliar and often low-quality food paired with travel and late nights starts to afflict the digestion of attendees. If tightness is also present, some of our Melissa Essence helps relieve cramping, and if pathogens are suspected, some Guggul Essence (also on sale) can be added.

For more long-term support, our Turmeric Spiritualized Essence can be used on a daily basis to reduce inflammation, act as an antioxidant, and support healthy digestion, metabolism, and blood sugar. Recent studies have also shown turmeric to be of benefit to the brain and its functioning, protecting it from degenerative disease and damage, and the Spiritualized Essence level most connects with this type of tonic effect. 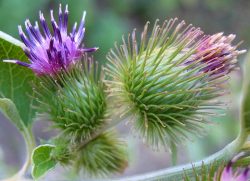 Our Liver Ens is also on sale, and it features Turmeric along with Milk Thistle, Dandelion, Burdock, and other herbs to support the liver’s function and health, and that of the whole digestive system.

An Essence-level Spagyric, it is useful as a short-term therapy for healing and recovery, followed by long-term tonics such as Turmeric Spiritualized or our next sale Spagyric, Kutki.

On the extreme end of the bitterness spectrum is Kutki, an Ayurvedic herb which is gloriously, intensely, unapologetically bitter, as we wrote a few years back when we first worked with it. That strong bitterness is an indication of equally strong healing effects, and Kutki has been shown to have direct reparative effects on liver tissues, useful for recovery from illness or imbalance that has damaged the liver.

The liver plays an important role in immune function, too, and makes many of the decisions about the chemical balance and metabolic response of systems further down the digestive line, which fits with its place as the organ of Jupiter, the archetype of judgement.

Our Kutki Spiritualized Essence is especially intelligent in this action, and we’ve had many reports of it boosting immunity when needed, responding to infection, while also calming the immune system in cases of allergic response and inflammation.

Our next sale Spagyric bridges the territory between the bitters and the anti-infective resins we also have discounted for this sale. Myrrh is a classic, ancient healing substance, revered for sacred and medical uses for thousands of years. Like Frankincense, which it is often paired with, Myrrh is the collected resin of a desert tree, which it exudes in response to damage and injury.

Healing wounds is a signature of Myrrh, and it is one of the strongest anti-infective herbs of healing. It can be used topically to seal and protect injuries, as well as internally to directly fight pathogens, reduce inflammation, and ease pain through its interaction with opioid receptors. Perhaps this is why, in the Bible, Yeshua is given wine mixed with Myrrh as he is crucified; this would have been a small mercy to ease the trial he was suffering.

Even earlier in the story, Myrrh is famous, along with Frankincense and Gold, as the gifts of the Magi to the infant Yeshua. These three substances represent three treasures: Gold to pay your way in the commercial world, Frankincense for the gift of divine connection, and Myrrh for the wisdom that comes from your most difficult experiences. Those experiences, like our Myrrh Spiritualized Essence, are often bitter, but like the resin, they bring healing and strength.

Another medicinal resin, and closely related to Myrrh, Guggul is better-known in Ayurvedic healing than it is in Western herbalism, but it is an important and versatile healing plant. Guggul shares many of Myrrh’s anti-infective properties, and is even more purifying and detoxifying in its effects. More aromatic and less bitter than Myrrh, Guggul is better suited for longer therapy, and it is also considered rejuvenative and repairing, especially to nerve tissue.

Our Guggul Essence can be used alone, or as in Ayurveda- combined with other herbs to direct its purifying, detoxifying action. It synergizes well with Turmeric for digestive and intestinal imbalances, as well as for inflammation and pain in the joints. For respiratory infections, Guggul can be used with Tulsi or Ginger, and with Ashwagandha for metabolic health.

Not exactly an herbal resin, Shilajit, the “soul of the mountain”, is a tar-like substance that oozes from the rock faces in the Himalayas. It is believed to be the broken down plant and animal life, worked through the soil by the processes of time, and concentrated into a hard but sticky resinous aromatic gum which is increasingly popular as a medicine.

Shilajit is densely nutritive, high in minerals, especially iron, as well as benzoic acid, which is also in the aromatic resins of incense. Benzoic acid gives Shilajit its earthy-conifer scent, and its strong purifying and anti-infective properties. It is also high in fulvic acid, which can act as a catalyst and carrier in the body, increasing mineral and nutrient absorption.

Like Guggul, Shilajit is often used in formula with other herbs to direct or be directed by them. Our Shilajit Spiritualized Essence combines well with Saffron for its purifying and energy-clearing properties, and as a traditional Himalayan tonic, with Rhodiola and Cordyceps to improve stamina, endurance, and oxygen metabolism. 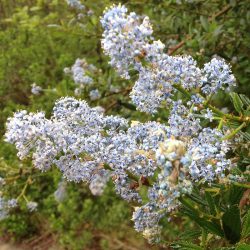 Our final cleansing herb doesn’t fit into the previous categories, or into most other herbal organizational systems, but it’s one that we wouldn’t be without, as it supports nearly every other herbal healing action you could need.

Red Root, also known as California Lilac or Ceanothus, is a beautiful plant native to the west coast, found in forms from ground covers through small shrubs to trees. In the spring and early summer, it is covered in flowers that range from sky blue to electric blue to lavender and purple, and these flowers are in turn covered in bees.

As I wrote a while back in a Weed Love article, Red Root supports healing by building or rebuilding tissue structure and integrity, mainly through the lymphatic system. At that time, I was using our Red Root Essence to support healing after surgery, and I’ve also used it for seasonal allergies and to recover from colds and flus.

Red Root is not directly antibacterial or antiviral, but it helps the “trash collection” system of our bodies’ back alleys, the lymphatic actions of drainage and removal that collect dead viruses and bacteria and move them out so that they don’t build up and further impede healing. Our Red Root Essence can be very supportive to the more directly anti-infective effects of Echinacea and Oregon Grape, used with them and for a time after the acute phase is over.

Our Red Root Spiritualized is a more long-term tonic to the spleen and lymphatic functions, useful for recovery from illnesses that require detoxification, such as Lyme disease, chronic Candida, and other complex systemic infections. In these cases, Red Root helps the body deal with the die-off of invaders and the buildup of damaged cells, preventing the “cleansing reaction”, also called a Herxheimer reaction. Calendula is an especially good combination with Red Root for this therapy, along with some Astragalus to restore intelligent and balanced immune function.