For this sale, we’ve selected just a few of our most supportive and tonic Spagyrics for love, romance, and sensuality. Of course, these are important aspects of life at all times of the year, but during Valentine’s season, we all tend to think more about making our love lives more rewarding. Maybe it’s seeing all the hearts, flowers, and candy, or maybe it’s being stuck inside while the winter weather continues, but whatever the reason, we hope you enjoy this selection!

Click here to go right to our sale page, or read on for more information.

Our first Spagyric has a story behind it, as so many of them do. Long ago, a beautiful young Mayan girl and a handsome boy fell in love. The problem was that the girl was consecrated to belong to the temple, and could not marry or be with a lover.

The couple could not bear to be apart, though, and so they ran away together. The priests soon discovered this, and chased after them, eventually catching up. And because this is a Mayan story, it gets gruesome here- the priests killed the pair, and cut out their hearts, casting them on the ground.

Energized by their love, the hearts sprouted and grew into two plants- his into the Cacao tree, tall and strong, and hers into the Vanilla orchid, entwined around the Cacao’s trunk. This is how the two plants are often found in nature, and also how they are often grown, as companion plants supporting each other’s growth.

These two plants also balance each other in healing use, as well, through their complementary chemistry. Cacao contains phenylethylamine, the heady chemical of the rush of infatuation and a new, exciting romance, while Vanilla contains chemicals more like the bonding hormones of nursing mothers. Together, they energize passion and devotion in balance and harmony, which is probably why they are so often used together in cooking.

Our Mayan Lovers Somalixir is just these two Spagyrics: earthy and deep Cacao and sweet, creamy Vanilla. The flavour is delicious, complex and interesting in ways that candies do not do justice. It’s a great formula for bringing together the two sides of love and the many ways its energy manifests. Taking it by yourself creates an inner balance of these polarities, while using it with a partner brings a Yin-Yang flow of connection in which all aspects can be explored.

We also work with Vanilla and Cacao as separate eroSoma Spagyrics, which can be an interesting exploration of each energy on its own.

Cacao is energizing and is also an excellent superfood, high in antioxidants, magnesium, and iron, in addition to its aphrodisiac properties.

Vanilla is soothing and comforting, associated with sweetness, love, and affectionate caring in the historic form of baked goods, as well as its connection to motherhood. Vanilla is also rich in antioxidants, and is anti-inflammatory and calming to the mind and heart.

Our next Spagyric is not a plant at all, but the byproduct of a very interesting insect. Mantis Egg Case is a special substance used in Traditional Chinese Medicine, considered balancing to the center, and harmonizing to the dual natures of heart/fire and kidney/water. This can be seen as similar to the Cacao-Vanilla pairing: heart/fire representing passion and the body’s warmth, while the kidneys carry the creative essence of fertility.

Mantis is also used to bring more energy to the skin, whether for healing physical disorders of the skin, or as a subtle energy that surrounds the body and forms a protective shield against negative influences. Mantis’ fortification of skin energy sits closer to the body than that of Astragalus, and this makes it a very interesting Spagyric for sensuality.

Taken in the context of sexuality, dance, or other movement, our Mantis increases the sensitivity to touch, and even the approach of a touch from a few inches away. Moving together with another person, then, becomes a connected and intuitive dance of interaction and response on physical and non-physical levels.

It should be noted that the Mantis Egg Case is the “nest” left behind after baby Mantids hatch, and using it in medicine does not harm any of these wonderful creatures!

Our next pair of Spagyrics are decidedly on the more Yang end of the continuum, both being traditionally used to boost masculine energy, performance, and health. 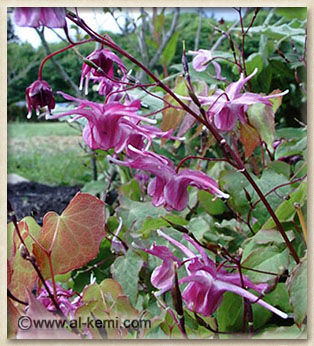 The first is another Chinese medicinal herb, Epimedium, known in TCM as Yin Yang Huo.

It also contains flavonoids that increase circulation throughout the body, which is a common mechanism of action for male sexual function, but which is also supportive to the function of the brain and other organs.

Finally, another stimulating herb, this one from Southeast Asia: Tongkat Ali. This root is often called Malaysian Ginseng, as many of its uses are similar, even though the plants are not related.

This combination of effects make our Tongkat Ali a popular tonic for athletes, supporting strength and stamina while calming inflammation and stress. In our experience, it creates a deep feeling of strength, making physical exertion easier and less taxing on the body.