Brigid and her Dandelions

This week marks the ancient Celtic time of Imbolc, the festival marking the midpoint between the winter Solstice and spring Equinox. Catholics celebrate the feast of St. Brigid during this time, which connects back to the more ancient dedication of Imbolc to the goddess Brigid. Candlemas, too, falls in this week, and as a celebration of the purification of the Virgin Mary; this, too relates to Brigid as the ruler of both purity and fertility.

As I’ve mentioned before, our local climate hews more closely to the Celtic wheel than anywhere else we’ve lived, and I was surprised the first year we were here to find February is usually very spring-like. There is some debate, but the word Imbolc is thought to either mean “in the belly” or “in milk”, and this time of year, the fields all around us are dotted with pregnant sheep and new lambs.

Also dotting the fields in early spring are the ever-present dandelion, Brigid’s sacred flower. To our modern, lawn-obsessed culture eternally at war with the dandelion, this seems like a humble or even insulting attribution, when we think about the many more noble flowers a goddess might want! But as with so many things, when we look at the deeper story, the wisdom is seen. 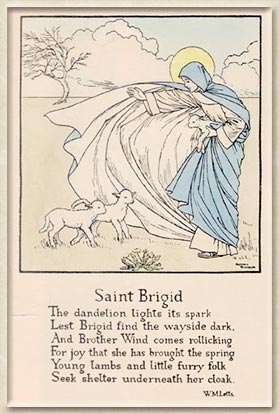 Like the Greek Persephone, Brigid’s return at Imbolc marks the ascendancy of the light half of the year and the return of the green life and fertility. The bright yellow dandelions are her candles, lighting her path from the season of cold and dark to the renewal of light and life that her presence brings.

After a long winter of stored roots, the fresh, bracing bitterness of dandelion greens is a welcome tonic, and the milky sap that flows through the plant shows its importance to Imbolc season- dandelion greens are a galactagogue, an herb that increases milk production and nutritional content. Browsing livestock such as sheep and cows know this and will eagerly seek out dandelion greens, and humans have followed that wisdom for ages, as well.

The milk of the dandelion carries another signature in its taste, that of bitterness. Bitter flavours, avoided in our culture, are a sign of liver tonic properties, stimulating digestion and the flow of bile. Both its leaves and roots act as gentle cleansers to the liver, kidneys, and lymph system, and at the same time, dandelion carries large amounts of potassium and other electrolytes that support further wellness.

In the soil, dandelion transforms toxic heavy metals and even the herbicides sent to kill it into nutrition for its own growth. Its taproot extends deep into the earth to bring up minerals it then shares with its surroundings and anyone who eats it. In our bodies, dandelion’s chelated minerals bond with toxic minerals and metals and replace them with healthy ones our bodies can use.

Dandelion’s ability to thrive in any environment, to truly bloom where it is planted, makes it a crucial plant for nectar foragers such as bees. In our own field, early in the cold part of the year, and later in the hot and dry part of summer, dandelions were the only flower available for our bees. The honey we collected from them smells and tastes like dandelion, sweetness out of bitterness, balancing the energy of both.

Dandelion works to improve the environment wherever its fluffy floating seeds land, acting as a dynamic accumulator of nutrients that it changes into forms more available for other, successive plants. In this way, the spring dandelion lights the way for the later plants of summer to bring in their abundance and beauty.

Like many of its family, dandelions’ faces follow the sun as it moves from morning to night, so even as their light leads Brigid into our world, the light that she carries directs their attention in return. Brigid is associated with the sun, and she carries with her all forms of light– fire and the hearth, candles (hence her enfoldment into the newer celebration of Candlemas), and the inner fire of inspiration and creativity.

Brigid also presides over the more literal creative fire of smithcraft, which in the coded language of ancient texts often refers to alchemy. This, in turn, connects back to her other role as a patroness of healing. Thinking back to our humble dandelion, whose botanical name, Taraxacum officinale, means “the official remedy for disorders”, her flower and healing connection becomes more clear.

At her ancient home in Kildare, even after the Christianization of Ireland, the local abbey was dedicated to St. Brigid, and an eternal fire was tended there as a representation of her energy. This abbey was thought to be the remains of a more ancient temple of women dedicated to Brigid’s service, and even as an abbey, her old traditions were kept, with each abbess taking the name Brigid as she was invested.

In that era, abbeys and monasteries were important seats of earthly and political power, with ideas of kingship and societal structure being based on the Church’s teachings. In 1132, when a local king had a woman favourable to him installed as the abbess of Kildare, a rival king, Dermot MacMurrough, attacked and plundered the abbey, raping the new abbess to delegitimize her rule.

Even with this successful power play, or perhaps because of its brutality and the violence he used in many other similar actions, MacMurrough’s rule was opposed by enough of the other rulers that he ended up in exile in 1166, only to return to reclaim his throne through the use of foreign influence- leading the Norman invasion of Ireland, changing that country from a clan- and family-based society to one of feudalism and class division.

Despite the apparent defeat of the goddess and the loss of family and matrilineal-based rule, the wisdom of Brigid continued within the new political structures. During the time between MacMurrough’s attack and the eventual shutdown of the abbey during the Reformation, the women of the abbey had taken on the important role of keeping the knowledge of the ancient laws of Ireland.

Brigid as a saint now also became the Lawgiver, and she was invoked and her representatives consulted as the old laws were codified into Christian rule. Here, Brigid arose anew, like the dandelion- any tiny seed, any bit of root, will sprout into a new plant, better adapted to the changed conditions, illuminating the way from darkness into light. These weedy beings and energies are better seen as allies than enemies, since they can never be really conquered, and the influence of Brigid and her followers meant that women’s rights in marriage, divorce, land ownership, and even childbearing were encoded into the new laws.

Centuries later, the Irish Women’s Suffrage Association was founded to draw into the movement “Catholic women who have hitherto taken no interest in social work” and to secure “the legal right to take our share in carrying out true social reform”. At the first meeting of the Association in 1916, St. Brigid was invoked as their patroness. Like most women’s rights movements, this one was resisted as radical, the women mocked and dismissed and even described as having “bitterness in their hearts”!

In our Spagyric system, bitter herbs and especially those tonic to the liver are under Jupiter’s rulership, which also often shows a signature of bright yellow in healthy ways (like the dandelion) and in disease (like jaundice). Jupiter rules justice, temperance, and the wise rule of law, and in the body, the liver plays a similar function regarding nutrition. The liver is the organ most involved in the sorting of inputs into either usable nutrients or waste products, and so it functions as a decision-maker regarding most of the chemicals in our bodies.

Our Dandelion Essence, created under Jupiter’s rulership, is a balanced representation of these effects, being bitter and gently cleansing while also carrying the minerals and body of the plant, extracted by the Spagyric processes we follow.

On a higher level, the bitterness of Dandelion and other herbs of Jupiter represents the truth of a situation, which can often be difficult to digest, but which is deeply nourishing when broken down and assimilated. Bitter herbs help us with this process both literally and figuratively- helping the liver let go of waste that our bodies cannot use, and our minds release stagnant beliefs and patterns that no longer serve our highest good.

If you’d like to delve a little more deeply into the magick of this season, you might enjoy a lively talk I did on Imbolc with Caroline Casey, available on her website.