Our newest special combination is a blend of our true Alchemical Oil of Gold with our Rose Magistery, called Rose Gold.

Created over the course of a decade, it started with natural sustainably panned gold nuggets, which have never been melted and so retain the crystal structure which holds their solar intelligence on our physical level. 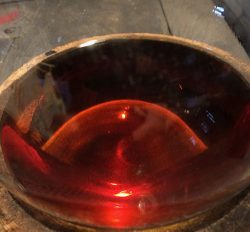 These nuggets were then extracted with an Alchemical process which destroys the gold and draws out a red essential oil. This oil is the true, inner essence of the gold, and is red because that is the core colour of gold, as can be seen when viewing gold leaf in bright sunlight.

This oil was circulated to allow it to evolve and receive cycles of universal energy to boost its intelligence. It was then aged for ten years.

The companion to the oil of Gold is our Rose Magistery, made from Organic pink Damask roses from Bulgaria. The process of making a Magistery takes over a year, and includes every possible constituent of the plant, from its purified mineral salts, through its alcohol-soluble constituents, to its refined essential oils. Magisteries also undergo a long circulation process, and this one was aged for six years in preparation for its final incarnation.

Once brought together, the mixture was circulated again in a Spagyric process which is like a reincarnation, allowing it to break down, open, and re-coalesce as a new being.

The result is a medicine which is both Alchemical, made from minerals and invoking the four elements; and Spagyric, using plant intelligences to recreate the three levels of being.

Working with it, the energy is expansive, warm, and bright, collecting itself in the Heart center, but also spiraling out from that core. This quality is one of a warmth at the center of the being, much like our Sun at the center of our solar system or Tiphareth at the center of the Tree. From that central place, all energy and fire is moved outwards, through all the other planetary organs and back to the stable center again. It is easy to work with this circulation with one’s own Qi or awareness and to create an orbit of all the inner energies, spiraling in harmony as a microcosm of the larger world.

The combination of the Solar energy from the Gold and the Venus qualities of Rose make it very supportive to Heart-centered meditations, such as invoking loving-kindness, Christ consciousness, or any work of devotion through service. It brings a purity of spirit and intent to the being, like the Mystical Rose of contemplative Christianity, or the gentle magnanimity seen on the face of the Buddha.

One interesting effect we noticed was a feeling somewhat like what we call “forest vision” – the state of peripheral awareness and subtle sight that Venus-rules plants give. But with this combination, the vision is both opened to the liminal edges of sight, but also brightened and sharpened. I am looking forward to trying this formula for wildcrafting and ritual work in Nature.

It is very concentrated and so should be used at tiny drop doses, as the Solar energy can be overstimulating if too much is taken. It builds over time, especially if you sit in meditation with it- find it here in our store, and let us know what you think!