The weather here on the Oregon coast never gets cold, exactly, but it does get colder than summer, and it definitely gets wet. It’s not as challenging a winter climate as some we’ve lived in before, but it still has us reaching for immune tonics and supports as the fall shifts to winter. This time of year, the weather and other stressors seem to conspire against us and assault our defenses, but we’ve got a collection of Spagyrics to help you sail right to the New Year in great health!

Echinacea is the classic beloved immune boosting herb, and for good reason. Its traditional Native American use was against venomous bites and stings, and although this isn’t its main use today, it does speak to its ability to help the body rid itself of damaging “invaders”. Nowadays, we rely on it for protection from infections, especially airborne respiratory ones such as colds and flu.

In many studies, Echinacea has been shown to increase the release of immune-defending chemicals in the body, as well as to act on the cannabinoid system to keep the entire immune system in balance. It is also anti-inflammatory, working at the root of many diseases, as well as their infective cause. We find our Echinacea Essence best used for short courses of time, in response to a direct threat such as feeling run down or if someone around you is sick.

Another strong support Spagyric for acute infections is the Southwestern root, Oshá. This celery-looking plant grows in the mountains of Arizona and New Mexico, where it has a long history of use for respiratory and sinus infections, as well as a general cold weather tonic. It is a very strong anti-microbial, active against a wide range of bacteria, viruses, fungi, and other pathogens, which may be why bears use it as a pre-hibernation tonic, rubbing it all over their fur.

Besides its antimicrobial action, Oshá increases the moisture content of the mucus secretions, and so thins congestion in the lungs and sinuses. For this use, our Oshá Essence combines very well with Yerba Santa to tonify and heal the inflammation of these tissues so that they can recover and be strong again.

Elder is another very specific winter tonic herb, targeted especially to fighting influenza infection, as many studies have shown it to be excellent for. The flu-fighting effects are mainly in the sweet berries, extracts of which have been shown to reduce days in active illness by as much as 2/3. Our Elder Essence also contains the flowers, which are diaphoretic and fever reducing, as I wrote about in this post.

For a more general Winter (or anytime) tonic, Licorice root has a lot to offer. This sweet root is used in Traditional Chinese Medicine to direct and harmonize formulas with its adaptogenic intelligence, as well as making the taste more pleasant. Indeed, there are not many herbs that are as sweet as Licorice, and its balancing intelligence, along with its respiratory tonic effects, show it to be a classic herb of Mercury.

Licorice helps the body fight off infection, as well as being anti-infective in its own right. It also has a balanced steroidal-like inflammatory effect, and so when used in respiratory illness, it eases breathing and helps the body deal with clearing out waste more efficiently. Our Licorice Essence combines well with most other immune herbs, and its cough soothing properties are enhanced by Mullein, while its cleansing properties are supported by Red Root.

Licorice can be imbalancing to people with hypertension, heart problems, or overactive adrenals, so be sure to use it under a healer’s care in those cases. 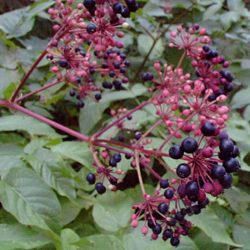 A less well-known respiratory defense herb is local to us, and we make two different Spagyrics from it: California Spikenard.

This Ginseng relative grows into a tall, leafy shrub in our Northwest forests, coming up from thick roots in the forest duff. It grows as tall as a person, or a bit taller, and in the fall, it has deep blue berries that taste a bit like Ginseng, or one of its other local relatives, Devil’s Club.

Spikenard’s roots are gnarled and twisted, with steplike scars from each year’s growth. They smell very sharp and hot, like Ginseng but also spicier, and chewing one is bracing and invigorating. The early Eclectics learned of its uses from the Native peoples, who chewed it to stay strong in the cold or during famine. It is an antiseptic to the respiratory tract, and calms dry, spasmodic coughs. Our Spiritualized Essence of Spikenard Root is warming and stimulating, building stamina for difficult activities and easing tightness in the respiratory system.

California Spikenard berries have a similar energy, but are less stimulating physically and more soothing to the respiratory tract. They are a gentle but effective expectorant, and remind me a little of Elderberry in taste and energetics. Our Spikenard Berry Spiritualized Essence is also a good uplifting mood tonic for winter, cutting through the lethargy of the cold and dark season and lifting the mood and vital energies.

For more long-term balancing of the immune defenses, the sweet root of Astragalus is said to increase the “Wei Qi”, or defensive energy that runs just outside the skin. Protecting us from external negative influences such as infection, irritants, pollution, and even energetic impurities, the Wei Qi is the shield that lets us move through the world and remain healthy.

The source of Astragalus Root’s healing in the body starts deep, at the bone marrow where immune cells are made, and from there, it boosts immune-protective substances throughout the body’s tissues, from bone to skin. Our Astragalus Spiritualized Essence is a great long-term immune tonic, as it does not create imbalance over time, and so it can be started before whatever season is difficult for you, and continued as long as needed. It is also energetically protective, creating a safe sphere around you where you are strong and vibrant.

Mushrooms are a whole class of herbal medicines that are also very well-suited to long term preventative use, and we have combined several of them into our Defense Somalixir formula. From Birch Polypore, protecting the skin and outer tissues from inflammation and damage, to the immune-modulating and liver support of Chaga, to the deep tonic wellbeing that Snow Lotus creates, this formula protects your body and spirit from all kinds of imbalance and illness.

For our final winter tonic, we have Cordyceps, a strange being with diverse and powerful healing properties. A strange mushroom that has been revered for centuries in Tibetan and Chinese medicine, Cordyceps is considered the premier tonic to the lungs. It is not anti-infective in itself, but it is deeply nourishing to the tissues and functions of the respiratory system, helping it work more efficiently from the breathing of the lungs to the oxygen transport throughout the cells.

Our Cordyceps Spiritualized Essence is energizing in a balanced way, but also steadying to the nerves and mood, making it a good ally for both the physical and emotional aspects of asthma attacks. It can be used to keep the respiratory system functioning well throughout winter, or after recovery from illness, or as a proactive support to athletic performance. We especially like it combined with Tibetan Rhodiola, which increases its energizing intelligence, and also with Ginkgo, as in our Altitude Somalixir.