For a few months now, I’ve been working on a new project that I have been really enjoying, and I’m excited to finally share it with you! The first two in a series of ritual oils is available in the season they most connect with: Frankincense and Frankincense+Myrrh. These new oils are made in tandem with our Spagyric work, and following the same paradigm, but they are also something new and unique from our lab. Click here for their store listings, or read on for more information. 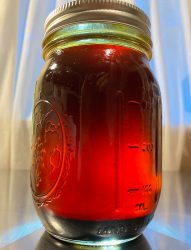 They are made from resin that is first Spagyrically opened as part of the process to create our Frankincense Magistery, and our Gold, Frankincense & Myrrh Somalixir. This material has been processed to release the chemical and energetic constituents locked up in the resins, allowing them to be elevated in their next processing steps. This leaves them more pure and accessible than the raw resins, more charged with the planetary energies our timings direct them to, and ready to release the aromatic gifts of the trees they came from.

Then, for the infused oils, they are extracted into Organic extra-virgin olive oil for a month-long period, spending time slowly incubating and also undergoing more intensive hands-on work to coax them into the oil base. During this time, I was amazed by how much the oils would change as they seemed to relax into their warm oil bath, which deepened its scent and intelligence each day.

This way of working with aromatic plants is very ancient, much older than the isolation of essential oils, and it is the way aromatics would have been used in ancient Babylon, Egypt, Greece, and Rome. It creates a much more rounded expression of the whole plant’s intelligence and healing properties, not just the most volatile as with essential oils.

In my work with them, I am finding them much safer for my respiratory system than essential oils, more profound and long-lasting in effect, and much less irritating. The feel of the olive oil, itself a very sacred substance, the warm aroma of the trees reaching out through the resins, and the slow extraction process spoke to me in a timeless way that connected to something older and deeper than my earlier work in essential oil aromatherapy.

From a ritual standpoint, they are more personal and inward in direction, as the scent is just on the skin and moves inward from there, not radiating out into others’ sphere of energy. Their smell is present softly at first, stronger as they warm and connect to the wearer’s life energy, and then slowly fading as the working is complete, moving their influence to the inner state. We find this makes them perfect companions for magical work, in which the practitioner seeks “to know, to dare, to will, and to keep silent”.

Resins are intriguing substances to work with, difficult to extract but powerful in their healing and spiritual potential. Countless ancient peoples have known this, going as far back as the Sumerians, who burned Frankincense and Myrrh for religious and secular ceremony, health, and for aesthetic reasons. Since that time, there is a line of cultures one after the other working with these sacred vital gifts of the trees, and as the story of the birth of Yeshua tells us, they were held as precious materially and spiritually. 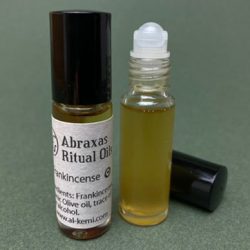 In the story of Yeshua’s birth, Gold is literal treasure, the coin of the realm. Frankincense represents the treasure of connection with the Divine, whether that is the Yahweh of the Bible, the pure energy of the Source of creation, or one’s own inner divinity. The ancient Egyptians considered Frankincense to be the tears of Osiris, another slain-and-risen deity, and the resin was collected in the summer under the auspices of Sirius, when the trees could be wounded to release their tears, but still live and continue to grow.

In ritual work, Frankincense is connected to Tiphareth, the sphere that sits at the center of the Tree, much as our Sun sits at the center of our Solar system. Osiris and Yeshua, as already mentioned, are connected to this energy, as are Mithras, Apollo, and many other gods who fall and yet rise again like the Sun. Inner work with the Solar energy brings confidence, charisma, radiance and vitality, while Frankincense in particular eases the anxiety and tight energy that can sap the flow of positivity.

As I wrote in this post, Frankincense opens and deepens the breath, allowing the Spirit of the working to suffuse the whole self with inspiration through respiration. As with our Frankincense Magistery, I find our Frankincense Ritual Oil to link the energetic and physical Hearts in a feeling of openness and devotion, connecting back to the description of Tiphareth’s Sephira as the sphere of Beauty. Creating a state of calm, focused contemplation, the aromatics in Frankincense are anti-depressant and induce a feeling of warmth all over the body, as if the vitality of Sun itself is being invoked. 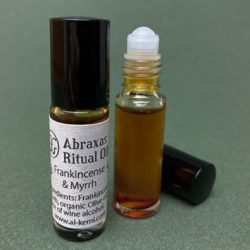 Myrrh, in the ancient texts and the more recent Biblical writings, represents the hard-won treasure of difficulty, the lessons that we learn through suffering and pain. Myrrh is very bitter, and this speaks of the nature of difficult experiences, but at the same time, Myrrh is a healing balm created by the tree for its wounds and which can also heal ours, physically and energetically. Perhaps this is why it is brought at the beginning and end of the story of Yeshua, at his birth in preparation for his eventual destiny, and at his crucifixion and by the women who visit his tomb, as I wrote about in this post.

And, just as Frankincense interacts with our emotional state to ease anxiety and lift mood, Myrrh activates our opioid receptors to mildly sedate and relieve pain. To me, this says that even though the teaching may be bitter and hard-won, there is also some compassion in the lesson and the plant intelligence will ease us through it as gently as is possible.

Because of this dual nature, and its astringent and drying qualities, Myrrh is under the rulership of Saturn, the intelligence of the Sephirah Binah. Binah sits near the top of the Tree, and is the first Sephira of materiality on the path of descent. Or, moving from the other direction, it is the last level of physical existence, its dual nature expressed in the Gnostic mass:

I am Life and the giver of Life, and therefore is the knowledge of me, the Knowledge of Death

Our Frankincense+Myrrh Ritual Oil expresses Myrrh most strongly, especially at first, with the lightness of the Frankincense coming out over time as the Myrrh settles into the system. The Myrrh aspect is supportive to workings with Karma, fate, destiny, and the line of events leading to what must be. It aids in accepting the “bitter truth” with grace and insight, helping you to learn from your difficulties and not need to repeat them, especially calling on the Frankincense connection to the Divine for wisdom in walking that path.

Myrrh is grounding and solidifying, in some ways the opposite of the levity of Frankincense, but meditating on the breath as it rises and falls and the scents waft in and out of you is a useful practice to link higher and lower together and draw on the gifts of both.

For any of these practices, an even more focused sphere of influence can be created by also taking some of our resin Spagyrics, such as our Frankincense Magistery, our Myrrh Spiritualized Essence, or our Gold, Frankincense & Myrrh Somalixir. In this way, the different aspects of these plants that we separated in our lab are reunited in your being, making your body and practice part of the lab work of Spao and Gyre.