As I write this, our sweet dog is snoring next to me, tired after a long morning of sunning himself in the garden. He is a sun-loving creature, and this season of long warm days is his favourite. His cheery, bright disposition perfectly reflects the energy of this time of year and I always enjoy his company in our garden.

I was out there harvesting some St. John’s Wort, as is traditional today, St. John’s Day. I wasn’t sure if it would be ready to pick since just yesterday, the flowers seemed far off, locked up in green buds. But this morning when I checked them, they were glowing with yellow blossoms, some fully open and some just starting to unfold, and when I crushed one between my fingers, it stained them a deep purple red. That pigment is hypericin, one of the active constituents of the plant, and its presence told me the flower tops were ready to harvest.

I put on some gloves (more on that in a moment) and snipped the top few inches of several branches, bending to reach them in their nook under our big composter. I have no idea how they got there or why they chose that spot, but the colony of them grows each year, watered by the drips from the compost and by me when I think of it. 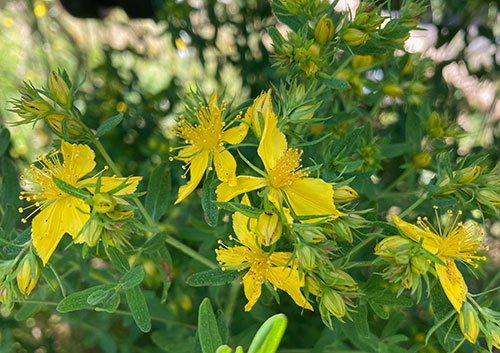 It’s a small patch, but perfect for our needs- I’m infusing it into some oil for a topical painkiller rub and a more solid salve, perhaps mixed with some other herbs.

This oil and salve aren’t something we sell, I just make it for us, but harvesting it made me reminisce about past herbal adventures and think about St. John’s Wort and the planetary energies it carries.

The deep red juice of St. John’s Wort would seem to speak of Mars, and especially so if you get the juice on your skin and then spend too much time in the sun, as I did years ago. I was collecting the herb in the feral places it loves around Santa Fe, and I was young and invincible and didn’t need sleeves or gloves. Or so I thought! An angry, welty burning rash was the lesson I got from that carelessness, with scars and dark spots all up my arms that lasted for several years.

Back then, in the early 90’s, we made an Essence of St. John’s Wort under the rulership of Mars, since it was historically used as an anti-viral, with its uses for depression just beginning to be studied. Sometimes I joke that we have been herbalists since St. John’s Wort was an immune tonic- and sometimes other herbalists even laugh at the joke!

As herbalism started to become more mainstream, St. John’s Wort was one of the first herbs to gain popularity, especially in the “this for that” herbal paradigm. Don’t want to take Prozac? St. John’s Wort is the herbal equivalent! It was a sort of gateway herb for many people who would not have otherwise tried plant medicine, since it could be understood chemically in a way that seemed official and safe.

The official line on St. John’s Wort soon turned on the herb a bit, as that unfortunate side effect I experienced became more well-known. Phototoxicity is the scientific name for it, and it’s an effect from quite a few plants. St. John’s Wort’s phototoxicity can be dramatic, though, especially in herbivores like the Australian sheep who consume large quantities of it and spend all day in the sun. These poor sheep were the scare tactic poster children for the dangers of the herb, and it started to either fall out of use, or be sold as isolated “active constituents” that lessened the effect.

The problem is that St. John’s Wort is a whole plant, and its entire chemical makeup, along with its energetic intelligence, is needed for its full effect. And, as it turns out, some sun exposure is also needed to activate both the anti-depressant and anti-viral properties of the herb. That solar energy that the plant gathers from the height of the summer is its medicine, and its cheering, strengthening energy just isn’t activated if you stay inside, in the dark. It’s a matter of balance and temperance, the eudaimonia I wrote about a while back. Just enough Sun to cheer and warm, but not so much as to burn.

The Solar archetype is a good one to explore for understanding this balanced temperate state, and we can see the continuum of it in many manifestations of its intelligence. On the Tree of Life of Qabalah, the Sun is Tiphareth, Beauty, sitting at the center of the Tree and both connecting and mediating all the energies around it. In the macrocosm, we see this in our own solar system with the Sun at the center, warming the planets that circle it, some with too much heat for life, others with too little, and one which is perfectly balanced.

Tiphareth is the Sephira associated with all of the slain and risen deities, from Osiris and Mithra to the more modern Yeshua. Like the Sun, these beings seem to leave our world and take their light with them, only to arise again in shining glory. The baptism of Yeshua by St. John is the first rebirth in that story, washing the celebrant clean of past negativity to start anew. St. John’s Wort is associated with a similar energy of protection from evil forces, which is why I saved one sprig of it to hang over our front door.

In that great chain of being from above to below, the Solar energy is reflected in herbs like St. John’s Wort, as well as other natural things such as minerals- gold being the Solar metal. Looking back to the red oil of St. John’s Wort, I think of the redness that is also in Gold, hidden to normal sight. As Paul taught me from his years painting churches, when held up to the sun, a piece of gold leaf shines not gold, but red. Traditionally, gold leaf was affixed to icons and paintings using oxblood to both hold it in place and enhance the redness that is considered gold’s true, inner colour. 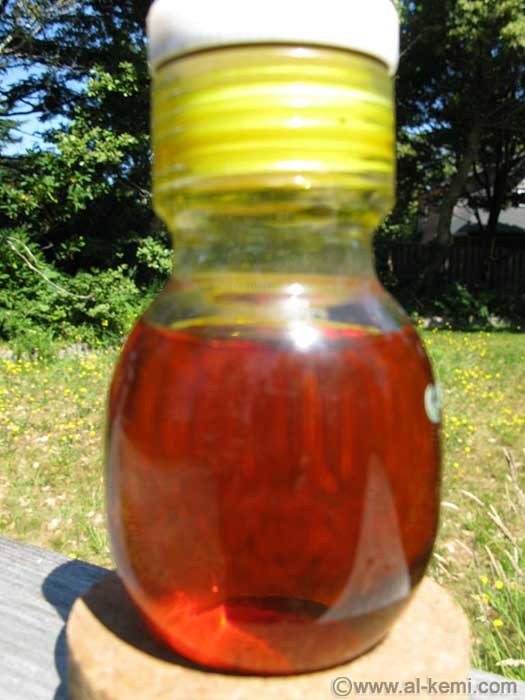 That red is extracted in our Oil of Gold process just as the red oil comes out of St. John’s Wort into carrier oil or alcohol, and that signature also connects to blood- the red river of the heart, the Solar organ, lifted and cheered by Oil of Gold and St. John’s Wort, as well as many other healing Solar herbs. Once the heart is strong and bright, it can better do its work of sending the vital red life throughout the body as the centering warmth of the Sun becomes the protective heat of Mars.

As St. John’s Wort increased in popularity as an anti-depressant, we switched to working with it under the Sun’s rulership to enhance that quality and better reflect the energy that our customers needed it to support. Our Spagyric work is an Art, and sometimes plant energies are mixed and variable in one plant, and its up to our intelligence to guide them in one direction or another through our processing work.

Like Gold, St. John’s Wort’s Solar energies can be tricky to work with and are not perfect for everyone. In a few weeks, I will start to feel the shift in the light that the Solstice initiated, and I’ll have a few days of glum energy as the dark side of the year creeps in. At that time, small doses of St. John’s Wort will be the perfect reminder of today’s sunny energy, and I’ll pull through the gloom and into Autumn with good spirits. But too much St. John’s makes me punchy and irritable, too Solar and expansive, hyperactive and insomniac. So in the dark season of the Winter Solstice I will reach for Rhodiola, which I find a more balanced form of Sun for me, uplifting and spiritually sustaining but also steadying to my energy.

Gold also carries energies both positive and otherwise, and this dichotomy reminds me of alchemical conferences we went to each year back at the beginning of our journey. As everyone came together again, we would note the personality changes in our friends, and how some would suddenly be much more egotistical and grandiose than before, maybe even snobby and unfriendly.

We’d say to each other “I bet he made Oil of Gold this year”, and sure enough, we’d hear that was the person’s newest lab project. The Sun rules self-esteem and charisma, and like my experience with St. John’s Wort, there is a dose that uplifts and cheers, and one that leads straight into too muchness. As with all the planetary intelligences, the Solar energy can get away from you a bit until you find the center point of eudaimonia with it.