The Energy of the Lab – Part 2

In our first article, we discussed some of the ideas and practices that Alchemy has inherited from the Hermetic tradition, and how much of that core philosophy also informs magickal work. We also described some of the ways of preparing for a magickal ritual or an alchemical process, especially in how the planetary intelligences are worked with to charge the working space.

In the lab work, the intelligence being invoked through the planet’s qualities is not a deity or spirit guide, as in magick, but instead is the intelligence of the plant being worked on. As we described in that introductory article, we begin by knowing the plant’s likes, dislikes, gifts, and abilities, and work within ourselves and in our space to welcome that plant’s presence.

The goal with all this tuning is to invite the plant’s higher being and intelligence to animate the Spagyric being created, so that it will be not just a strong physical medicine, but a living talisman of the whole energy that the plant carries.

This is because Alchemical and Spagyric work is a process of reincarnation, in which a substance is taken apart, broken in structure into the levels of Salt, Mercury, and Sulfur, purified, and then recombined at a more elevated level. The end result, the Spagyric, is a living expression of the continuation of that plant’s life, able to connect with our living intelligence in new ways not possible for raw plant.

But, before this final goal is reached, we must start with a deep understanding of the plant as it was in nature, connecting with its being on its own terms first. In our lab, we start this part of the work very simply: we eat the plant raw, by itself, every day, for two weeks before any processing on it begins. 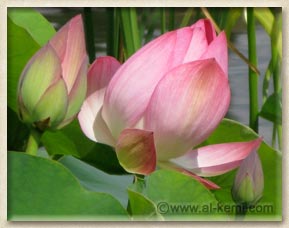 Since we talked about Moon energies in our first article, I’ll describe how this practice went with a classic Lunar plant we love to work with- Sacred Lotus.

We started by eating the Lotus every day, chewing on roots, leaves and flowers in turn. We read about Lotuses in botanical, medicinal, and spiritual texts, and spent much time just sitting and looking within for the voice of the Lotus. We found that Lotus took us to a very deep, still place, reflective like the surface of deep, dark water, like being a Lotus nodding over the surface of a lake.

Then, we prepared the lab space by first clearing it of extraneous energies, including our own, and then sitting in the space recalling the quality of Lotus’ energy from the earlier meditations. It is important to make sure that your work space is clear, but not full of your own energy, or charged with an idea of what you think that plant’s energy should be. We found that the Lotus had spoken to us quite clearly so far, and so it was easy to hold that space and allow the expression without changing or limiting it.

So, even if we had started work in the lab that day hoping to create a certain type of Spagyric quality, if that was not what Lotus offered, then we would have to either pick another plant or pick another day. This is because the plant has its own will and intelligence to carry out what it needs to do, and our will in the lab work comes in as choosing the right intelligence, rather than choosing an intelligence and then bending it to an effect of our choosing.

In magickal work, it is always understood that the deity you call has its own free will, and so a figure like Kali, the goddess of war and destruction, would not be invoked for a peacemaking ceremony. Rather, a figure like Quan Yin, the goddess of compassion, might be called upon for her gifts.

Likewise, it is a matter of choosing the right plant as a tool for the job, understanding that the plant has free will and will bring what it brings, aligned with your goals only if you have chosen the plant wisely. That choice is informed by the time spent with the raw plant, and governs the next steps taken in the processing to draw out and magnify what was communicated then.

By this point in our work with Lotus, it was clear that the energy of the Moon would be called on to draw out the Lotus’ character, as that was the archetypal ruler of the qualities, states, and effects that Lotus had shown us. So, we would next charge the lab with the Lunar energies using many of the same tools as magickal work: colours, tones, mantras, imagery, and inner intention. This starts the building of a structure that supports the effects of the Lotus, and allows it to express its full potential.

How we draw out that potential, and what it manifested as in the Lotus work, will be discussed in the next article.