For a recent custom formula Paul is working on for a friend, we wanted a new Spagyric that would bring in a high, sacred energy relating to the Sun and its golden light of clarity. This formula will also contain some Oil of Gold, and so we thought of our much-beloved Gold, Frankincense & Myrrh Somalixir.

We created that Somalixir as a Spagyric expression of the three treasures of the Wise Men- Gold, as a literal treasure to pay your way in the world, Myrrh for its gift of the wisdom that comes from difficulty, and Frankincense, which is the treasure of connection to the Divine.

Having worked with Frankincense in that context, we were excited to work with it as a single extraction, and so, many months ago, Paul started the process for making a Magistery, both for the custom formula and as an offering in its own right. That Magistery is now done and available in our store– read on for more information about it.

Frankincense is the collected resin of the Boswellia tree which grows in the deserts of the Middle East. It is a hardy tree, able to survive harsh and arid climates partly because of its aromatic resin. Like many trees, Frankincense produces its resin as a defense against insects, physical damage, heat and cold, and as an atomized cloud of sunscreen that floats around the tree.

The resin is collected by making small cuts into the trunk, which will pour out the resin to seal and protect the cut from further invasion and infection. The resin crystallizes and hardens, and can then be scraped off and collected for sale. Frankincense resin has been collected this way for trade for at least 5,000 years. It is one of humankind’s oldest commodities, since it is stable once dried, very valuable in even relatively small quantities, and considered a deeply sacred and essential component of spirituality in many religions.

It was used in Egyptian religion and funerary rites, and in mummification, and it is mentioned in the Bible and Talmud, and in the writings of Herodotus. As an incense, Frankincense is considered purifying and protective, and, as with many incense materials, its smoke is believed to carry the prayers of the devout up to the heavens.

Here on earth, the effects of Frankincense have long been known to be both calming and uplifting, with an especially beneficial effect on the lungs and breathing. Medicinally, one of the resin’s most common uses has been for infections and congestion of the respiratory system, and it is very effective as a rub or steam for this use.

At the Magistery level, the healing qualities of plants are present, but they shift to higher expressions of the healing effect, or to a more energetic or tonic quality which is related to the mundane use, but at a more soul-based level of being.

With our new Frankincense Magistery, the respiratory effects are still there, but they create an openness in the whole chest, easing tightness and constriction in the heart area, clearing weight and worry from the Heart center, and slowing and deepening the breath in a way that brings the mind to a more meditative state. 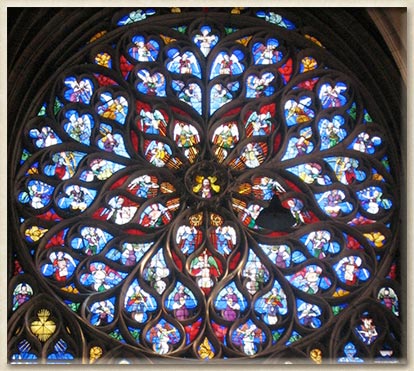 As I was working with this Magistery to get to know it, the meditative message I got was the image of the classic Rose Windows of old cathedrals.

These masterpieces of stonework and stained glass are shaped like a rose, a circular whole made up of many small sections radiating from the center, like the petals of a rose.

The rose is to mystical Christianity what the Lotus is to the spirituality of the East- a representation of the beauty and love that union with the Divine brings to our souls.

That love takes many forms, some purely etheric while others are more sensual, and a mingling of these two streams of devotion can be found in the 12th century philosophy of courtly love and the troubadours. In that time, the rose, always sacred to the goddesses of love such as Venus, became associated with the Virgin Mary, and most of the rose windows created during that time are dedicated to her, with images of her at the center.

These windows are illuminated by the rays of the Sun shining through them and into the eyes of the church’s members as they looked up to the beauty and harmony of creation captured in jewel-toned mandalas. Coupled with the effects of the billowing Frankincense smoke, the heart is opened to teachings and wisdom, and a warm sense of community and connection is created. Inspiration is felt, in all senses of the word and its connection to breath and the spirit.

This combination of the opening of the Heart center of Venus and its related qualities of beauty and devotion, overlapped with the literal heart organ, ruled by the Sun and its centering energy of light and clarity, is the combination we feel most strongly from our Frankincense Magistery.