Sulfur : the Soul of Spagyrics

We wrap up our long-running series on the three levels of Spagyric with Sulfur, the Soul level of being, connecting the previously discussed Salt/Body and Mercury/Spirit levels to the divine realm of archetype and universal energy. As we discussed in our first article on Salt, and our second installment on Mercury, these three levels were originally described by Paracelsus as the basic inner levels of all natural beings, connecting minerals, plants, and animals by correlation and allowing healing work to be targeted in a very refined way.

Sulfur is the level of the Soul, the eternal aspect of a being. Sulfur can be thought of as a blueprint for that being’s nature- like the blueprint of a building, the Sulfur level determines the materials, arrangement, and structure of the being, which in turn, determine its purpose and use in the world. In its role both within and above the individual organism, the Sulfur level is about archetype. It carries the archetypal energy of the planet which rules the organism; and it also holds the perfected ideal of the organism as an inner template that orders the growth and life of the being. This is the work of the Soul- to communicate something higher to us, and to hold that spark within us so that all of our being is guided by it. 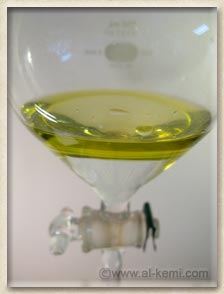 In plants, the Sulfur resides in the essential oils, which are both the most concentrated and most etheric constituent of a plant. This speaks to the dichotomy of the Sulfur level, and the way in which it can sit at the deepest center of being, while also being the most elevated and immaterial.

Essential oils are exactly this energy in the plant, carrying a refined and instant expression of everything that plant is best at, but able to affect us in a totally non-physical way, through scent. Reaching out to us through their aromas, plants achieve a nearly disembodied state in which they can integrate into our own eternal self and retrain our inner archetype to better and higher states of perfection.

This power through subtlety can be seen in the classic herbs of aromatherapy, such as Rose, Lavender, Melissa, and Clary Sage, and these are some of our favourite herbs to create Magisteries from.

In keeping with the wholeness of being that is true Spagyric work, we process our Magisteries with a focus on the essential oils, while still purifying and including the body and spirit in the minerals and alcohol. This allows the soul-healing properties of the oils to enter us more deeply, and their effects to be integrated at all levels of being so that the healing is available in our physical and emotional life, as well. This is one of the unique gifts of Spagyrics, in its ability to target a level which is the source of the imbalance, but to re-balance it as part of the whole it must function as part of. Working with essential oils alone does not bring this integration of body, spirit, and soul.

Spagyrics is a work of refinement, and besides focusing on the Soul level of the oils, the Magisteries are refined much more than the physical Essences or Spiritualized Essences. The process for making a Magistery is a year long, and includes the extraction and maximum purification of multiple salts, alcohols, and oils. These constituents are brought back together, elevated through Spiritualization, and then again refined as a whole new being at a higher level of expression. This is why, even though our Magisteries are the most concentrated Spagyric we make, they are also clear and very etheric in taste, dissipating into your being almost instantly from the mouth.

The etheric nature of our Magisteries can make them more complex to understand and use in healing, since they carry more than just the commonly-understood aromatherapy or healing effects of the plants from which they are made. Since they are made to connect with the archetypal level of Nature’s energy, each Magistery is more connected to its planetary rulership than to specific herbal effects. They are still very strong extracts of the plants they come from, but our Magisteries of Tulsi and Fennel have more in common with each other through their mutual Mercurial nature than might be expected from other preparations of these herbs.

This makes the Magisteries useful for healing deeply set in imbalances that relate to the constitutional rulerships, since often the most troubling life-long issues a person has all relate to the same collection of influences. This can manifest, for example, as seemingly unrelated problems in the love life and with the skin, but connecting at a fundamental level to an imbalance in the energies of Venus.

Magisteries can also be used to deliberately work with one specific planetary energy to bring its strengths, to balance a weak area in an astrological chart, during a time of transit, or as a step-by-step initiation. In this kind of work, you are deliberately saturating yourself with the highest aspect of a planet to serve as a template and a touchstone, showing your core self what the perfected energy of that planet feels like so that it can be called upon when needed.

This work of embodying the energy of one planet at a time, one day at a time, for a ritual period and purpose can be surprisingly powerful- as with the account of one friend’s journey with the Kit here. It’s a personal process we revisit from time to time, as well as working with specific Magisteries for long periods to shake loose new levels of insight into the great planetary beings of our universe.

We have enjoyed this look at the three levels of being in Spagyric and healing work, and we hope that you have, too! If you haven’t read the previous articles in the series, you can find the Salt level here, and the Mercury level at this page.