This time of year, we see many Hallowe’en decorations showing the classic witch figure, hunched over a bubbling cauldron of flying ointment, or crossing the skies on her broom. Most of these images are fanciful and fun, and part of the ritual of the season. But there is some interesting truth to the legendary flying ointment, and some useful shamanic work that can be done with flight-facilitating herbs.

A few years back, we were doing research on flying ointments, and we found a great reference on the subject- How do Witches Fly? A Practical Approach to Nocturnal Flight, by Alexander Kuklin. In this fascinating little book, the author, a scientist working in biotechnology, examines ancient recipes for flying ointments from a biochemical perspective. 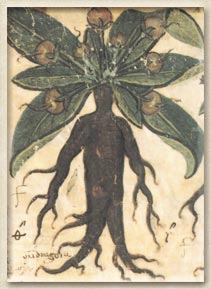 It has long been known that the flying ointments included powerful herbs such as belladonna, datura, henbane, and mandrake (shown on the left, from a 7th century edition of Dioscorides’ Materia Medica), and that these herbs likely caused hallucinations in the users. All these main ingredients are from the nightshade family, a hallmark of which is vivid mental and bodily sensations of flight.

What Alexander Kuklin uncovered is the extremely sophisticated chemical knowledge behind the balance in the ingredients of these ointments. Firstly, using these herbs topically in a fat-based solution, while still quite dangerous, is much less toxic than oral use. The classic broom that the witch rides upon was an applicator for the ointment, which also had tantric aspects to its use.

What is even more surprising is the pharmacognosy behind some of the ointment’s other ingredients. Most nightshades contain an alkaloid called atropine, named for Atropos, one of the three Moirai or Fates of Greek myth, responsible for cutting the thread of life.

Atropine might be familiar to viewers of hospital dramas- it is often injected in emergency situations as a way to re-start a slowing or failing heart. Too much atropine, though, can overstimulate the heart and kill the patient, and the medical student mnemonic describes the rest of its effects “hot as a hare, blind as a bat, dry as a bone, red as a beet, and mad as a hatter”.

To counteract the atropine, flying ointments also included Monkshood, a beautiful blue flower containing the alkaloid aconitine, which is used carefully in traditional Chinese medicine to slow the heart. Together, atropine and aconitine hold a delicate, razor’s-edge balance between stopping the heart and overworking it. The body was thus kept in suspension, in a state with a remarkably intense feeling of flight, as the spirit and soul were free to travel and do whatever magick was intended for the working.

After the flight was over, the witch often had only vague and wild memories of the night that had passed, as forgetfulness is another characteristic of nightshade poisoning. Even in the midst of the flight, the person using the ointment is often totally immersed in the experience, insensate to all that is going on around them. Keeping the psyche together and returning it to the body after such an experience is a great test of spiritual power, the classic shamanic initiation of being taken apart and only put back together again by the strength of one’s own Will.

We should stress the point here that the chemistry of flying ointments, and especially the work with nightshades, is very complicated and potentially dangerous, and not something to jump into casually. Please do not try any of these ideas or methods if you are not completely, totally sure of what you are doing and willing to take responsibility for the results.

That said, the chemistry and intelligence of the nightshades as they relate to shamanic flight is very interesting, and our studies into flying ointments helped us create a safer but still powerful Spagyric formula, our Flight Somalixir. Our next article discusses flying herbs of Eastern cultures, and our final article in the series talks about how we pulled all this research together into our own Spagyric formula for Flight.

2 thoughts on “Flight : Witches on Brooms”