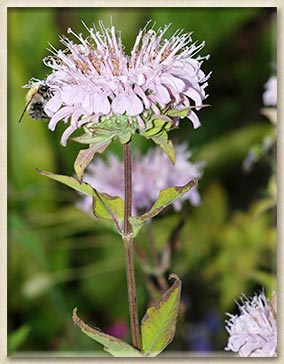 Earlier this year a “new” plant came across our radar and it sounded so interesting that we decided to work with it. I put “new” in quotes there because, although we never made a Spagyric from it, we’ve been familiar with Bee Balm since we lived in the mountains of Northern Arizona.

There, this gorgeous plant is called “wild oregano”, or in Spanish, “oregano de la sierra”, and the Latin is Monarda fistulosa. Although it is only distantly related to true oregano, it shares much of its chemistry and culinary uses.

I used to collect the leaves in the open areas between aspen groves near our home, and dry it to use in much the same way as oregano.

It tastes a bit milder and more complex, also having notes of thyme, mint, and sometimes citrus. It was always one of my favourite wild foods, and we especially loved cooking with it when camping.

I never used it much medicinally, except as a tasty and healing tea for colds and congestion, where its aromatic compounds help open the sinuses and soothe a scratchy throat. It’s especially good for this purpose infused in honey, although that preparation is so delicious it’s hard to save for cold season!

My main herbal reference at that time was the excellent Medicinal Plants series by Michael Moore, may he rest in peace. He doesn’t say much about its uses, and so it was as a culinary herb that I knew it best, and although I have missed its taste since we moved out of its native ecosystem, I hadn’t thought about it much until recently.

That changed when it was mentioned in a talk I heard, and then it came up in several discussions and in an aromatherapy book, all referencing its higher properties for healing the emotions and mind. Spagyric processing is so perfect for bringing out these subtle-level intelligences, that once we found a source for it, we decided we had to work with it. So far, we’ve made a Spiritualized Essence, and since it is such an aromatic and lovely plant, we plan to make a Magistery, as well.

There are Monardas all over North America, differing in flower colour and aromachemicals, but all are tall, square stemmed mint relatives topped with a fireworks display of flowers. These flowers come in deep red, dark purple, lavender, pink, and even one yellow, and all are beloved by butterflies, hummingbirds and bees, hence the name Bee Balm.

Another common name for members of this family is Wild Bergamot, since the Eastern variety, Monarda didyma, has leaves that smell like Bergamot, the unrelated small citrus whose peels are used to flavour Earl Grey tea. After the Boston Tea Party, patriotic colonists swore off the tea from England and made their own tea-like concoctions from native plants, and this Monarda was one, sometimes called “liberty tea” for that reason.

Western varieties like our Monarda fistulosa tend more towards the oregano/thyme chemotype, with citrus notes being less pronounced, and that also hints at their healing uses. Like oregano and thyme, they are antiseptic, anti-viral, and expectorant, although in much gentler ways than their distant Mediterranean relatives.

All Monardas are also diaphoretics, inducing sweating to reduce a fever, as the Eclectics relied on, or for ritual cleansing, as in a sweat lodge. The Oswego, who said it had “102 uses”, used it for sweats and medicinally, which is how it acquired the name Oswego Tea.

That use, drawing out sweat for ritual cleansing, really sums up much of Bee Balm’s intelligence to me. Both medicinally and emotionally, it is considered an herb that draws fire to the surface and dispels it, an action mirrored in the firecracker look of the flowers. In stagnant infections or flu, inflamed digestive tracts, urinary infections, and topically, Bee Balm draws the heat out, clears the infection, and leaves tissues calmed and cooled.

Emotionally, Bee Balm has a similar effect, calming hotheadedness and the fire of anger, either with a soothing coolness, or if the emotional state is very intense, with a strong sense of clearing like the release of the sweat lodge. Ritually, it is also used to clear out colder emotional states, especially grief and sadness, which can also be supported by physical release as in a sweat, yoga, or other practice.

Medicinally, Monardas target the respiratory system and the gut, and it is also these areas that suffer when we go through a great loss. Tightness in the chest, heart-chakra pain and heaviness, and that feeling of a “gut punch” can all be dispelled with Bee Balm, which will physically heal the damage that stress does to those systems, while calming the nerves and helping emotions be processed in constructive ways.

For loss and grief, Bee Balm’s properties remind me a bit of Western Bleeding Heart, and I feel these would combine well to help in both feeling and understanding a loss, as well as letting go of what or who is gone in order to move forward. Some Melissa, another plant of bees, could also be added to bring a bit of uplift and cheer, or for long-term use to rebuild the Shen, you could add Albizzia, with its similar pink puff of flowers.

An excellent aromatherapy book I have- Aromatherapy Anointing Oils by Loughran and Bull- discusses a related Monarda as being an excellent oil to regulate the flow of spiritual growth and information, and I feel this is a real strength of our new Monarda, which also ties back to the processing of difficult passages in life. The book describes Monarda as a “gatekeeper and guardian of the spiritual path”, and as a remedy that can either speed up or slow down spiritual lessons, as needed.

When we tasted the new Spiritualized Essence, Paul and I both had strong sensations of air and cleansing, the signature of herbs of Mercury, the ruler for this Spagyric. In my body, it seemed to move like a breeze through my system, easing my breath and releasing some chest tension I didn’t realize I had.

On a walk later that day, I was very aware of the energy of the wind and air, which made me feel open and clarified mentally and energetically. I think this effect could be supported by combining Bee Balm with Tulsi, so that both the body’s energy and the more subtle levels of being are cleared of stagnation. Lavender, too, would be a nice pairing, as it would accentuate the balanced feeling of calmness and contentment that the Bee Balm initiated.

Once I was inside again, I felt a prickly sensation on my skin, like the feeling right before you break into a sweat, and I made a note to work with Bee Balm in a sauna or hot yoga sometime to push that physical release. In Paul’s experience, that prickly quality came through as “bubbly”, starting in the inner core and then flowing outwards to gather in the Wei Qi.

The prickly energy also reminded me of the way some of our Ambers can feel as they create an electrical field of protection around you, and I am reminded of one reference that said Bee Balm helps you hold to your own path of growth even if you’re surrounded by negativity.

With all these physical, emotional, and spiritual effects brought out by the Spagyric process on Bee Balm, I am excited to work with it more and hear about others’ explorations of it. It’s available in our store now, and I hope we will also soon have it as a Magistery.