Both of these new Spagyrics are probably familiar to many of you in other forms- we’ve worked with Calamus for years as an Initiatic, and wine grapes give us the alcohol we use in our higher Spagyrics. Exploring different facets of these plants through different levels of Spagyric work has been interesting, and we hope you enjoy their subtle distinctions, too. 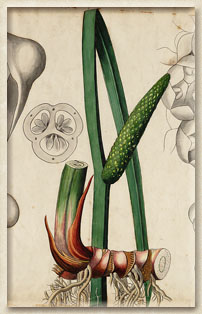 Calamus is a plant that grows all around the world in slightly different forms, from the Indian variety used in Pacha Karma to the Waterfall Calamus revered in TCM as a tonic to Shen. Both our Alchymical Initiatic and the new Magistery are made from American Calamus. We find this variety has a good balance between cleansing and clearing movement and clarity of thought and communication- all classic Mercurial qualities.

The new Magistery tastes more aromatic and less bitter-rooty, which makes sense given that the Magistery process focuses on purification of the essential oils and on refinement in general. It has a warm camphor note and a clean taste, and starts to move around the subtle body right away.

It is very quickening to energy and inner movement, yet also clarifying and even emptying to the mind. It takes all the mental chatter and sweeps it aside, leaving the pure exchange of energy that is the true essence of communication. It makes focus on words or specific thoughts difficult, but it brings an unfiltered and honest connection at a higher level with anything the attention is turned to.

Both Paul and I felt its effects most at the periphery of the body- hands, skin, and feet. I felt a desire to move and meditate through pure physical expression, feeling the Calamus would help me let go of the mental narration that can get in the way of walking meditation and similar work. Paul felt the same unsettled energy, but preferred to sit still with it, moving on the inside as it played around his system. Either way, the signature of our Magistery of Calamus is fluid movement and a clarity of perspective that could be very supportive to all kinds of practice.

Wine grapes are familiar to everyone, and probably too is the research into wine as a pleasant and powerful tonic for health and healing. In fact, the old Alchemical saying “all plants aspire to be grapes” sums up our lineage’s view of these plants- they manifest the highest the vegetable kingdom has to offer us, on all levels.

Recently, looking into grape pomace as a garden amendment led us to some interesting research into this byproduct of winemaking for human health, and we decided to create a Spiritualized Essence of Grape.

Pomace is the leftovers from pressing grapes into wine- mainly the skins, but also some of the juices, stems, and seeds, all dried together after being filtered from the grape juice so it can go on to ferment into wine. Pomace is used as a soil amendment in many vineyards, putting back much of what was taken away at harvest.

Pomace is also interesting for many of the reasons wine is interesting: it contains concentrated amounts of polyphenols, polysaccharides, flavonoids, and antioxidants. Many of these properties end up in the final wine, but much stays behind in the pomace, giving it the same healing properties.

More research is being done on pomace all the time, but so far, it has shown great promise for lowering post-meal blood sugar in diabetics, as well as supporting healthy cholesterol. The phenols and flavonoids that create these effects extract well in alcohol, and so we were excited to make a Spagyric of them. In a way, this single-ingredient Spiritualized Essence is a true Spagyric in its purest form, made of just one plant taken apart and refined into a medicine.

Our new Spiritualized Essence of Grape was made from Cabernet pomace, but it has only a subtle smell and taste of wine. Mostly, it smells and tastes like a classic tonic root, such as Maca or Ashwagandha. This is probably due to the polysaccharides common to so many tonics, and the source of their tonic effects.

Energetically, this Spagyric is warming, bright, and centering. It moves all around the body, pulling the whole being together in an integrative way. We especially felt it in our heart organ, and in the center of the body generally. In Paul’s experience taking Spiritualized Essence of Grape for a few weeks now, it is a digestive stimulant, and can even cause stomach rumblings at higher doses, although at small amounts, it has a vitalizing effect on digestion, as well as the metabolism and energy levels in general.