Whether from an accident of geography, or through a more guided connection of people-plant co-evolution, it seems that the majority of the world’s powerful Shamanic plants are found in the New World, especially South and Central America. These are the lands of Ayahuasca, Coca, Peyote, Calea, Heimia, Salvia divinorum and many other treasures of plant intelligence.

The entheogens and initiatics we do know of from the Old World can be intense- think Mandrake, Amanita, Belladonna, and Henbane. The nightshades in particular are the specialty of the European shamans and witches, and their (in)famous flying ointment is one example of the complex chemical preparations that these ancient wise ones worked with on their spiritual path. Nightshades are powerful initiatics, dissociative and trying, testing the limits of one’s composure and control of the Will, but they are not suitable for every person or working.

New World entheogens are certainly powerful, and can also be intense, but they tend to be friendlier overall when used correctly, and much less unpredictable for inexperienced users. Maybe for this reason, these are the famous plants of modern shamanism and plant-based spirituality, with most seekers traveling to the Brazilian rain forest for their plant journeys, rather than to, say, Germany or Ireland.

This is unfortunate, since, as with so much of our work, this is an area where the wisdom of the West gets overlooked and disparaged, and opportunities for connection with our own traditional lineage are lost.

To help you discover some of the initiatic herbs of the Old World, we have put together a collection of our favourites as Spagyrics, on sale at 20% off in our store.

Vervain is the subject of its own article, since it is a new Spagyric we just finished. This healing and initiatic herb was used by several ancient cultures for divination, love magick, protection from spells and attack, and to connect with the souls of one’s ancestors and loved ones, the Beloved Dead. You can read more about my experience with Vervain, or buy some to try for your own practice.

In my work with Vervain, I also used our Clary Sage Magistery, since much of my practice at the time was in dream work. The name “Clary” comes from the old English name for this herb- “clear eye”, as its seeds have a mucilage that is used to heal disorders of the eye.

This eye-clearing effect also extends to the subtle levels of sight, and Clary is a powerful herb to aid clairvoyance, skrying, divination, and dream work. Our Clary Sage Magistery creates a very pleasant state balanced between calmness and attention, with the clarity you would expect from its name contained in a focused energy which is easy to move to magickal purpose. You can find our Clary Sage Magistery here.

Mugwort is another herb of dreaming, a plant which grows along roadsides and so is consecrated to travelers of all kinds. The undersides of its large leaves have a silvery sheen, and its latin name, Artemisia, shows a connection to the goddess of the silvery Moon and her rulership of night, the unconscious, and the watery realm of dreaming.

Mugwort protects travelers, whether carried on the person on literal walks, or used in a dream pillow, tea, or bundle over the bed or on the magickal altar. In this way, European Mugwort is connected to her relatives all around the world, all relied on for the same clearing and protective energy, from the Eurasian species used to clear energy in acupuncture moxibustion to the sagebrush Artemisia of Native American smudge sticks.

Our Mugwort Alchymical Initiatic has this same combination of opening the unconscious to input from the liminal realms, while protecting the traveler from being too open and vulnerable while in those spheres. 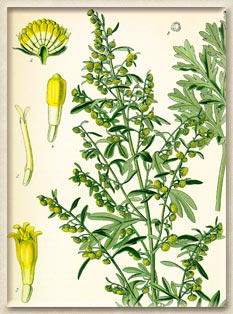 Wormwood is a more notorious member of the Artemisia family, renowned and sometimes unfairly reviled as the “dangerous” herb of the drink absinthe. It is true that Artemisia absinthum shares its name with the infamous drink of the green fairy, but it is there that the truth ends and hyperbole begins.

Wormwood does contain a chemical, thujone, that can be toxic if consumed in large quantities over long periods of time, although well-made absinthe may not have much thujone in it. In the heyday of absinthe, several high-profile and grisly murders were attributed to its influence, leading to the drink’s ban.

Loved by poets and artists, perhaps never the most stable of people, it became so popular that cheaper versions of it flooded the cafes of Europe, containing antimony, lead, and other poisons. It is now thought that the drink was no more inherently dangerous than the alcohol it contained, but its outlaw reputation persists.

Wormwood as an Alchymical Initiatic shows the creative, visionary, artistic gifts of this herb, and connects the user to the love of absinthe shared by Van Gogh, Manet, Picasso, Oscar Wilde and Aleister Crowley. More opening to the waking vision than its dreamy cousin, Mugwort, our Wormwood seems to show the most beautiful and lush aspects of anything to which the vision is turned.

Perhaps this connection to beauty is because of the very special nature of this particular vintage– it was created over a several year period during which we harvested only the flowers of our 15 year old Wormwood plant, a few at a time. Not an hallucinogen per se, but rather a facilitator of more beautiful perception, this Spagyric is one of our favourites- we hope you will try it, also.

European Waterlily is in the same family of beautiful flowers as the Egyptian Blue Lily and the Mayan White, all used ceremonially by the cultures they are linked to. The European is the most intense of the three, most conducive to deep states of trance, meditation, and skrying, and it has been used for such work since the time of the Druids.

During WWII, when morphine was in short supply, extracts of this waterlily were used as painkillers on the battlefield, and this gives an idea of how strong a relaxant and even narcotic these flowers can be. We find them the most dreamy, floating, and otherworldly of the three Nymphaeas we work with, with a deep stillness to their energy and a dissolving quality, a feeling of melting into whatever or whoever you are near at the time. You can find our European Waterlily Initiatic here.

We hope you enjoyed this tour of Old World plants, and that you’ll try some of them in your spiritual work!