Happy Solstice to you!

This year, our own local climate has been a bit sluggish to warm up, and so it’s finally seeming like summer. But we think it’s better late than never, and the plants and flowers in our garden agree. To celebrate, we’ve collected some of our favourite Solar Spagyrics, from herbs that carry the bright, warm energy and vitality of this longest day.

It’s hard to say when humans started celebrating the Solstices and Equinoxes, but their observation as seasonal and sacred events is an ancient one, dating back at least to the neolithic age which saw the construction of Stonehenge and Newgrange.

In cultures living close to the earth, dependent on hunting, gathering, and farming, the four corners of the year- two Solstices and two Equinoxes- were crucial calendar points for basic survival. Knowing what place in the year one was at on a given day allowed the long-term planning necessary to grow crops, find seasonal foods, and preserve enough of those foods to last until their appearance in the next year, when the wheel turned around again.

The Solstices, points in winter and summer, were the moments when the Sun seems to halt in its path, or in Latin, sol (“sun”) and sistere (“to stand still”).

In the Winter, the Sun’s highest point on its daily arc is a bit lower each day, and as it rises less and less over the horizon, the days shorten and the nights get longer. On the Winter Solstice, the Sun’s arc starts to climb again, and the days grow longer and warmer as winter recedes.

The opposite happens in the Summer, with the Sun climbing higher each day until the Solstice, the longest day of the year, after which the arc will flatten out into a slow slope into winter. This day, as the Sun makes its longest journey of light and warmth, was celebrated as an auspicious day to gather herbs for the year’s medicine, especially those connected to the Solar rulership.

To me, the herb that most encompasses that Solar energy is Rosemary. In the summer, it basks in the hottest part of our garden, seemingly invigorated by the rays that wilt its more delicate neighbours. In the winter, when everything else is grey and dormant, it is still green, flowering and offering food to bees and warmth to our cooking. It seems to gather up Sun all summer and then store it away for winter, sharing it with anyone who asks.

Also uplifting to the mood is Linden, an old-fashioned European herbal tonic from a beautiful, stately tree. Linden trees grew throughout our old neighbourhood in Eugene, and when they were flowering, it was hard to think straight through their heady perfume, not to mention the buzzing, happy bees that covered them in activity.

Rosemary and Linden are both loved by bees, as are so many of the flowers that become food and medicine for us humans. One food that comes more directly from bees is pollen, which they collect from flowers as a source of protein for their brood. Beekeepers, too, can collect this pollen from the bees for use as a medicine and for its nutritional properties, and like honey, it can be isolated from just one collection season to create varietal pollens.

The first varietal pollen we worked with was Blueberry, brought to us by a friend with a blueberry farm. This pollen was amazing- it was actually blue in colour, and smelled like blueberries! We were excited to make it into a Spagyric, and our Blueberry Pollen Spiritualized Essence was born. This Spagyric is sweet and syrupy, with a nutritive undertone of vitamins and polyphenols, like a wine or strong juice. It is energizing and uplifting, great for working hard in the garden or other strenuous activity.

Some time after we made the Blueberry Pollen Spagyric, we came into a batch of pollen from Blackberry fields to work with. The Spiritualized Essence we created from this pollen is more mellow in taste and effect, with a rich port-like flavour, and a supportive but balanced energy of stamina without stimulation.

Another tree beloved by bees is Hawthorne, which has types native to the old and new worlds. Flowering as the “Queen of the May”, the trees are covered with white and pink masses of flowers which are a good source of delicious fruity-tasting honey, and sacred to the goddess of love, united with her god at the Maypole; their union bringing fertility back to the land each year. 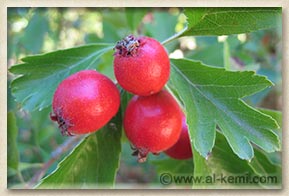 After the flowers have been pollinated, the fruit, or “haws” form, looking like the hips of Hawthorne’s relative, the rose. These fruits are the part of the tree used in herbalism, revered as a tonic to the heart and circulatory systems. Hawthorne’s active constituents slow but strengthen the heart, balancing circulatory health and the most basic rhythm of our life force.

In the heart and throughout the body, Hawthorne also strengthens collagen, making it an excellent tonic for rejuvenating the flexible structure of the body. Fruity and a bit sour, our Hawthorne Essence expresses these qualities and also supports the Heart in a sacred, Solar sense as the central fire of the being.

This support of the Heart as an organ and sacred center relates to the Sun’s role as the giver of life in our solar system, and Alchemists and herbalists long connected herbal tonic effects to the physical signatures in substances that showed Solar rulership. This connection between warming, brightening herbs and heart health is seen in the very name of the most European of herbal medicines, the cordial.

Coming from the root word “cord”, meaning “heart”, these alcohol-extracted medicines, made into sweetened drinks for enjoyment, were believed to contain the “cordial virtues” of the Sun- its warmth, strength, and its subtle qualities of expansive charisma and vitality.

Besides plants with direct cardiovascular effects, herbs such as Saffron which reflected the Sun’s golden colour were also used in these cordials, along with literal gold for its incorruptible and royal intelligence of Solar perfection. These two precious commodities- Gold and Saffron– come together with sunny Rhodiola root in our AU Formula Somalixir, a powerful plant and metal Spagyric.

AU Formula is very warming and rich tasting, with a brightness and depth to its energy. Its effect is that of centering, collecting all of one’s energy to a center point of strength like the center of the Sun’s Alchemical symbol.

That center, as we discussed with Hawthorne, is the warming heart of the circulatory system, but it can also relate to the spiritual Heart of the Divine nature within, the center of connectedness to inspiration, higher love, and devotion. In many religious practices, that center is activated through incense, which carries the prayers and minds of the devotees to a higher state of being.

Frankincense is the classic resin used for this purpose in countless traditions, and it is this synergy of heart and Heart that our Frankincense Magistery most speaks to. Calming and clarifying, it opens and slows the breath for meditation and contemplative practice, raising the awareness to a state of beauty and bliss.