Spao, Gyre and Telos : the Roots of our Work

We are really excited about the debut of a new project: a website for our talismanic jewelry, Telos Collection. This is a full circle project for us, as metalsmithing is Paul’s original vocation, both professionally and magickally. We created Al-Kemi some 30 years ago as an outgrowth of our personal interests in Alchemy and herbalism, but that interest in Alchemy was originally inspired by Paul’s studies of Hermetics, especially Paracelsus.

A physician and mystic of the 16th century, Paracelsus created the philosophy of healing and lab practice we follow, as well as coining its name: Spagyrics. But before Paracelsus combined his occult and medical knowledge into Spagyric work, he was the student of the monk Trithemius, whose other prominent student was the occultist Agrippa.

Trithemius was a Benedictine monk who created one of the most important foundational texts of Renaissance Hermeticism- the Steganographia. This book is a complex and multi-layered compendium focused on working magic through a connection to angelic intelligences. Trithemius’ system for these workings draws on correspondences between angels, planetary energies, and the days of the week and hours of each day. By lining up each level of influence to a particular intelligence, the magickal operator could perform the most effective working for whatever their intent was.

Trithemius’ student Agrippa took this system and applied it to ceremonial and talismanic magick, imbuing the ceremony or object with the desired intelligence through planetary and angelic symbols, created or charged at the correct moment for that influence. Paracelsus took Trithemius’ practical framework for capturing a planetary energy and combined it with his medical and Alchemical knowledge to create Spagyric medicines and the system for making and using them which we practice. 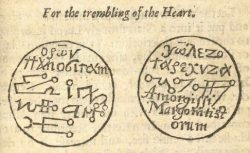 But Paracelsus also worked with talisman creation, and in his book The Archidoxes of Magic, he outlines many formulae and methods for creating magical and healing talismans, such as this Leo-ruled cardiac talisman. In all his methods, the common idea is the same as in his healing work: natural objects are inherently filled with life force, organized according to planetary sympathy, and can be magnified and further charged by working with that sympathy, as he explained:

On this truth is based the power of amulets and talismans and the influence which they may exercise over the astral form of the bearer. Talismans are like boxes, in which sidereal influences may be preserved.

The talisman-maker, like the healer, uses the astral and magnetic pull of his own imagination to draw in the forces needed; the healing planet to the patient, and the talismanic action to the amulet. That pull of imagination is the key in Paracelsus work, and this principle can be seen in the very word talisman, with its root in the Greek telos, meaning purpose or final end.

This telos is the perfected state of a being and relates to Aristotelian ideas that the goal and highest manifestation of any thing is present within the thing itself. Aristotle taught that the telos creates the form, gives it purpose, and draws it to the perfection of that purpose. In this way, all natural processes of change are pulled towards a goal, and Nature is alive and permeated with purpose.

Early in Paul’s work in metalsmithing, he started creating talismans using Paracelsus’ system of planetary timing for casting the metal, along with Qabalistic and Hermetic imagery for drawing in the influences desired, as well as ancient beads, stones, and other objects also imbued with sacred intelligence by past artisans. All these elements, when brought together through Paul’s imagination and art, created a teleological force for drawing in the perfected expression of a specific energy: prosperity through Jupiter’s influence, love through the energy of Venus, and so on.

At the same time, Paul was studying the Alchemical writings of Paracelsus, and he saw the common philosophical thread that united the talisman and the Spagyric. Both were created to carry a specific energy, the “box of sidereal influence” of Paracelsus, but Spagyrics, being made of once-living plants, created a much more adaptable and flexible talisman that could be used for spiritual practice or healing. That was in 1991, when we met and I brought my herbal knowledge to the picture and we created Al-Kemi as a result.

Since then we have both continued making jewelry and working with ancient beads, stones, carvings and objects, refining our techniques and skills to create both talismans and amulets. Once the pandemic started, keeping us at home even more than our normal hermit life, we have been more inspired to manifest the pieces our imaginations create, and our studio has been a busy and productive place.

Part of the draw is the meditative and peaceful work of creative expression and its therapeutic effect on body and mind. But we’re also motivated to send some of that energy outwards, into the world to those who will appreciate it and be helped by it, much as we do with our Spagyrics. And so, when Paul’s collection of completed work started to grow, we decided it was time to create a website to share these pieces and our thoughts on their creation, meaning, and purpose.

That website is now up at Telos Collection, and Paul’s first three collections of jewelry are listed there. We also have a small group of articles about talismans, ancient beads and objects, and related subjects, and we will be adding more jewelry and writings as the site grows. We have also created Instagram and Facebook pages for Telos Collection, and a group called Talismanic Revival for the discussion of talismans, amulets, and their making and use.

We will keep posting updates about Telos Collection here on Al-Kemi, since they are two sides of the same (magickal) coin to us, but you may also want to sign up for the Telos Collection newsletter for all our announcements and offerings there. And rest assured, we will remain as devoted as ever to our work with Al-Kemi and Spagyrics, which continues to be deeply rewarding and fulfilling thanks in large part to all of your support!

all orders over $75
US addresses only