Here in the Northwest, our local forests have many evergreens, which are beautifully green year-round, along with an abundance of Alders. Alder trees are deciduous, green in the summer and leafless in the winter, without much autumn show in between. As they lose their leaves this time of year, though, I can see that they are not completely bare, and as the winter goes on, they will colour up with a softer shade of green as lichen season comes in.

Lichens are really interesting beings- they are a symbiosis of an algae and a fungus, growing together as one organism. Each lichen has its own niche and growth habits, and they are found in almost every ecosystem and region on our planet.

Some lichens live on and even within the matrix of rock, decomposing the stone with acids and consuming its mineral nutrients as the stone breaks down. Other lichens are epiphytes, hanging in the tops of trees and subsisting only on rain, air and sun. The thin black crust on desert soil is a living skin of lichens, while others are not attached to anything at all, but blow from place to place, carried by the wind.

Such variation is possible through the adaptive intelligence of the two or more organisms that make up lichen. The fungus component provides structure, anchoring the lichen to its substrate and providing thready filaments that gather and hold water and nutrients. The algae or cyanobacteria making up the other half of the partnership contributes food through photosynthesis. Or, put more poetically,

“Lichens are fungi that have discovered agriculture” – lichenologist Trevor Goward

This partnership is so balanced that modern researchers see lichens as not just symbiotic pairings but as “holobionts”: entire self-sustaining ecosystems in miniature.

Lichens specialize in thriving in marginal habitats, and are among the first species to colonize areas damaged by pollution or disaster. They can create large colonies in places where trees and other plants do not grow well, and like trees, they transform CO2 into oxygen, acting as lungs in the same way as forests, but able to do so in much harsher environments. Perhaps paradoxically, they are also very sensitive to air pollution in degraded areas, and their presence or absence is used by scientists as an indicator of ecosystem health.

Alder trees, too, are pioneer species, sprouting quickly after fire or damage to the earth, able to fix nitrogen from the atmosphere into a plant-useable form through their partnership with root bacteria. This partnership works so well that, unlike other trees, Alders do not need to reclaim the nitrogen from their leaves before dropping them- they drop their leaves while still green, to be recycled into the soil as available nitrogen for the longer-lived trees to come.

Among trees, Alders are especially covered with lichens of many types. In fact, while researching for this post, I learned that the signature cloudy grey and white surface of an Alder trunk is not its bark, but an array of lichens! Without these partners, Alder bark is shiny and plain brown, and the tree is much less healthy. The grey and white covering protects the tree in a layer of anti-microbial defenses, but that covering is easily killed by pollution- as shown in the two Alder trees at the bottom of this page. 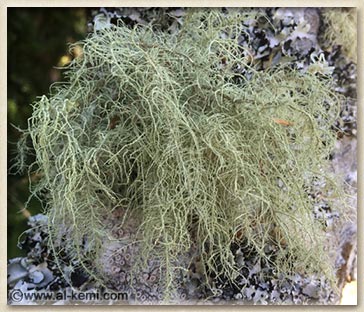 More noticeable than the grey lichens is Usnea, a larger pale green lichen that forms soft tufts all over the Alder trees in our yard.

There are a few species of lichen that resemble Usnea, but looking at them closely, it is easy to tell them apart. Usnea branches like a tree, with a main trunk and ever-finer branches coming off of it. Other similar lichens have a more netted or lacy shape.

The other way to identify Usnea is a fun demonstration for anyone who hasn’t played with it before. Take a piece of the lichen in question, and if it’s dry, moisten it a bit. Then, give a gentle tug on one of the thicker branches, stretching it out slightly. If it is Usnea, the green algal coating will break apart and the inner fungal core will be seen, stretchy like a thin rubber band.

Once you know you have Usnea, there are many uses for it, some especially useful in the fall and winter when it is most showy. Usnea protects the tree from infectious invaders, and can do the same for you, topically or internally. Like many medicinal mushrooms, the fungal core of Usnea is a balanced immune stimulant, and its algae skin acts more directly as an antibiotic.

Usnea can be rinsed and used as is topically as a wound dressing or protective cushion- I have had great relief using it to protect and heal my feet from the blisters of new hiking boots.
Internally, Usnea does not extract well in water, and is a less-than-delicious tea, but it does extract very well in alcohol, as in our Usnea Spagyric Essence.

Alcohol based Usnea extracts have a long history of use for respiratory infections, echoing its Dakota name which means “spirit of the wind”, and its Chinese use for wind-borne diseases, what we would understand as airborne infections of the season such as colds, flu, and even pneumonia and tuberculosis.

For respiratory support, Usnea combines well with Mullein if a spastic, tickly cough is present, with Oshá if there is thick phlegm and unproductive coughing, and with Yerba Santa if there are allergies or structural damage to the mucus membranes.

Usnea is also very active against a number of other pathogens, including Staph, Strep, Candida, Salmonella, and E. coli. For these uses, combine our Usnea Essence with Spagyrics supportive to the organs or systems being affected: Sage for the throat and tonsils, Pau D’Arco and Calendula for Candida, and Uva Ursi, Turmeric, or Guggul for infections of the urinary and digestive systems.

Like its two components, Usnea works well in synergy with other green medicines, forming a cooperative defensive shield to protect your well-being!