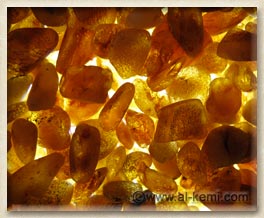 Revered since ancient times, Amber has been used in jewelry, medicine, and trade for thousands of years. Homer, Aristotle, Plato, and Pliny the Elder all mentioned Amber in their writings, and it was prized more than gold in ancient Greece.

Amber washes up from deposits in oceans and seas around the world, and the Greeks believed that it came from pieces of the Sun that broke off as it set into the waters each night. One ancient term for the Sun was “elector”, meaning “bringer of light” or “brilliant, shining”, and so Amber was called electrum.

This unique gem actually has electrical properties, and can pick up small items like straw, as well as creating sparks when rubbed against silk, wool, or fur. It was these properties of “electrum” that William Gilbert had in mind in the 1600’s when he described the effects of magnets using a new word he coined: electric. The term electron, created in 1891, was also inspired by amber’s properties.

Geologically speaking, Amber is the fossilized resin of a number of different conifer trees, all now extinct. When injured or broken, these trees would exude a sap to seal the wound and protect the inner wood, sometimes to a depth of two feet all around the tree. This resin fossilized over the millennia, sometimes with insects and other creatures trapped inside.

Amber is the product of transformative processes on many levels. As with all plants, the tree it came from transformed sunlight into its own body, and then the resin it gave off in its defense was transformed by time from plant into a mineral, golden like the Sun.

This slow fossilization makes Amber the vessel for changing cycles of energies as time passes by, a very Saturn quality of solidifying time. But, this energy forms in a literally electrical matrix, carrying a Uranus property of change and energy.

To make our Oil of Amber, an alkahest, or special menstruum, is prepared from tartar, the sediment on wine casks (another mineral from plants). This alkahest pulls all of the physical and energetic properties from the Amber, leaving behind a spent, crumbly and dry powder with no colour or taste. Its Solar glow, its Saturn structure and its Uranus electricity all go into the solution as its essence, to be used as medicine.

After the Amber extract is purified, it becomes our Oil of Amber. This medicine carries the electrical energy of the Amber, along with a deep taste of ancient forest and resin notes.

Our Oil of Amber is very protective, creating a charged circle of energy around the person using it, but not isolating or cutting off subtle interaction with others. For this reason, it is popular with healers, who need to connect with their patients but not take home everything they worked on in the healing sessions. Oil of Amber can also be added to perfumes for this protective effect.

In Chinese medicine, Amber is considered a tonic to Shen, the peaceful state of calm strength that resides in the heart, and is the source of all our energy and vitality. Our Oil of Amber protects the Shen and balances the nervous system so that our own electrical energy flows well but not wastefully, and our inner core is protected.

The peaceful quality is strongest in our Baltic Amber, while the Dominican we work with is more aggressively defensive. Different Ambers from different places each have their own unique signature, and we’re looking forward to sharing more Oils of Amber in the future, including a Green Amber from Chiapas which we just finished, described in this article.

For our current Amber Oils, click here to visit our store.

4 thoughts on “Amber : the Electric Fossil”