Shroomtastic is our newest Somalixir formula, and was inspired by my own struggle with seasonal allergies. In my research, I discovered that several medicinal mushrooms have shown the ability to balance the immune system’s mode of operation in a way that can reduce allergies, and Paul’s genius at formulation created this formula to help me and the many fellow sufferers we know and hope to help.

A healthy immune system is complex, but there are two main modes of action it moves through: TH1 and TH2. These two modes act like Yin and Yang, mutually balancing each other, with one rising as the other falls.

Each mode has a special role in our overall immunity, and a healthy system swings back and forth between them to cover the total range of immune response needed to stay healthy. TH1 protects us from within, fighting invaders inside the body, such as infections; while TH2 reacts to invaders from outside the body, such as pollens and environmental irritants.

If environmental stresses go on for long enough, or if a person’s immune system is inherently imbalanced, they can end up “stuck” in TH2 mode, with the immune defenses constantly overreacting to any substance. This reaction is seen in the familiar allergy complex of sneezing, wheezing, watery eyes and nose, and other symptoms, and may also play a role in more serious imbalances such as chronic fatigue syndrome. Staying in TH2 mode also means that the invaders that the TH1 mode is better at fighting, such as viruses and bacteria, can get the upper hand and cause infections.

Rather than merely boosting immune function, which can actually make allergic response worse, medicinal mushrooms bring the immune system back into its dynamic balance in which each mode is active when it should be, doing its job well and then giving way to the other as needed. In this way, medicinal mushrooms fit the highest ideals of tonic therapy, in which balance is found in a middle point of perfect function, rather than the reactive swings of conventional allopathic approaches. 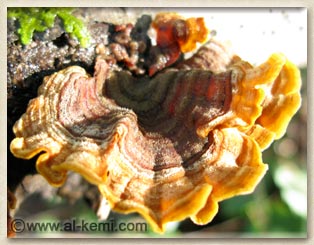 The polysaccharides in most medicinal mushrooms have this effect to some degree, but the two most studied and effective mushrooms for allergy treatment are Reishi and Turkey Tail, so we made these the cornerstone of our Shroomtastic formula.

To support the Shen spirit that can also be negatively impacted by illness, we added Spirit Poria, and to boost the neglected TH1 defenses against infections, we included Agaricus blazei. Cordyceps is also included to help heal the respiratory system, along with several other mushrooms, nine in all.

For both myself and several of our customers who have started on this formula, a reduction in allergic symptoms came in just a few days, with increased vitality and balance with longer use. I have also found that the few allergy attacks I do get no longer slip into infections, and so I feel that my entire defense system is tuned and operating in balanced ways again. If you could use such a positive change in your immunity, consider trying Shroomtastic, and let us know how it works for you.