We have been re-working some of our formulas lately, incorporating new herbs and new discoveries we’ve made through the years. Recently, we gave our Six Mushrooms Essence Formula a makeover, and we are happy with the improved effects.

The base of this formula is four Oriental mushrooms with long histories of use in healing (each one is also available singly):

Reishi is revered as one of the top medicines among the entire traditional Chinese pharmacopeia. It is supportive, energizing, and healing to nearly all the body’s systems and functions, especially regulating metabolism, immune defenses, and mental, emotional, and spiritual health. Reishi is energizing from the highest levels of being, calming the Shen so that the bright vitality of the Heart Spirit can shine through.

Shiitake is well-known as a delicious food mushroom, and is a powerful immune balancer. In fact, it is the only natural medicine ever proven to reverse HIV, and has also been used successfully against other viruses as well as several types of cancer.

Cordyceps is the premiere tonic to the lungs and respiratory system, helping your body get more oxygen out of the air, and also opening the lungs and calming the breath. Because of these effects, Cordyceps is an excellent tonic to true energy, supporting vitality and activity in a sustained way. Cordyceps has also shown the usual fungal healing effects: anti-cancer, anti-viral, anti-fungal, and general immune booster.

Maitake grows in temperate forests around the world, and is loved as a culinary mushroom. In Japan and China, Maitake has been used to boost the immune system and regulate metabolism. Modern studies indicate that this mushroom supports healthy blood sugar balance, maintains healthy blood pressure and cholesterol levels, and support weight loss. Maitake has also shown anti-cancer properties, especially against breast cancer.

Supporting these four powerful fungi is Turkey Tail, which has long been part of the formula, and the new addition, Agaricus blazei. 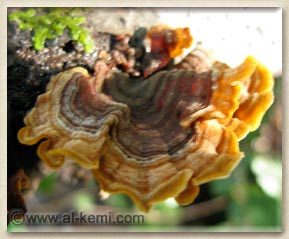 Turkey Tail mushroom grows in many temperate forests, including prolifically in our area of the Pacific Northwest. It is a beautiful mushroom, growing on fallen logs in a frilly fan shape with multicoloured bands like a turkey’s tail. Like many other fungi, Turkey Tail is used to treat cancer, immune deficiencies, and as a general tonic.

Agaricus blazei is less well-known than the other mushrooms in this formula, but it has great potential as an immune stimulant, defense against cancer, and as a balancer of blood sugar and cardiovascular health. In our work with Agaricus, we have noticed it brings a very strong feeling of “wei Qi” movement, a sense of the defensive shield around the body being strengthened and activated.

This wei Qi effect is much stronger in the new formula than in the previous versions, and the new version is also a stronger energy tonic. We find that it is more strengthening than before, and feel that it is now directed at healthy longevity in addition to just immune-boosting effects. This well-rounded quality is what we had always hoped this formula would carry, and we will both be adding it to our daily tonics.