Mercury : the Spirit of Spagyrics

This level of being is often the hardest to understand, as befits its Mercurial nature, but it plays a literally vital role in our Spagyric work.

As we discussed in our previous article on the Salt level, Spagyrics works with three different aspects of being in plants, each corresponding to a level of being in us. Paracelsus originally devised the Spagyric system for working with plants this way, and he described the three levels as Salt, Mercury, and Sulfur, the body, spirit, and soul.

In plants, Mercury resides in the alcohol- the Spirit in the spirits. Like Mercury himself, alcohol travels between and links both poles of the journey: alcohol is both the product of the breakdown of one plant and the means to break down another.

Alcohol is a sometimes controversial substance in our contact with customers, many of whom prefer not to use it in any way. As we’ve explained to people with this concern, we do respect the personal choice some make not to ingest alcohol in any form, even medicines, but we will not make any alcohol-free preparations, as the results would not be Spagyric.

Chemically, alcohol is crucial to herbalism, as it is both extraction medium and preservative, far better at both these actions than its most-used substitute, glycerine. But in Spagyric work, the subtle levels of being are of equal importance, and without the spirits, there would be no Spirit.

Alcohol carries the Mercurial life force of the plant from its original being in Nature to your being as you ingest it, it is the reason that immediate effects are felt when taking our Spagyrics, long before any chemical physiological changes take place.

If you have ever tasted one of our Spagyrics and been surprised by the immediate hit of the plant’s effects, often before you have even swallowed the dose, then you have experienced the connection to the plant’s Spirit that is only carried though the alcohol. That charge of energy and spark that starts the healing process will not happen if the alcohol is dispersed or diluted, even if the chemicals it carries will still end up in your body.

As with the Salt level, we can work in different ways to focus on different attributes of the Mercury level, fine-tuning the alcohol to target the level of being we’re creating the Spagyric to heal.

For our physical-level Essence Spagyrics, we use an organic grain-based alcohol, as we have found that grains, being more like food, create a heavier energy which is bound to the body. This heaviness holds the Spagyrics’ energy back some, keeping it available to the physical form for the healing offered by physical herbs like echinacea, goldenseal, or horsetail.

In people, the Mercury level relates to the vital life force, the Qi or Prana that charges the body’s functions and life. A Spagyric more refined in the Mercury aspect will work on this level, and that is the idea behind our Spiritualized Essence-level Spagyrics. Some good examples of herbs which express themselves well at this level are classic tonics like ginseng, fo-ti, or codonopsis.

Mercury also rules communication and intelligence, and our Veriditas Alchymical Initiatics are made at the Mercury level as well, to amplify the communication of intelligence and wisdom that Shamanic plants carry.

In either case, one of the ways that the two higher levels of Spagyric we create differ from the Essences is in the alcohol used. For our Spiritualized Essences and Magisteries, we use an alcohol made from Biodynamic grapes, which we further distill seven times before we use it in processing. 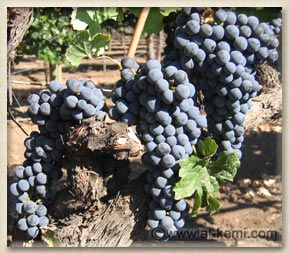 Since Mercury is the life force aspect, carried in the alcohol of plants, and since grapes are better able to naturally ferment than any other plant, grapes are considered the highest of the plant kingdom. In fact, the alchemical saying is “all plants aspire to be grapes”, something we remember every time we travel the beautiful vineyards of California!

The distillations we take the alcohol through before we use it serve to refine and sharpen its physical nature, but also follow an important principle in Spagyric work. Remember, Mercury is the go-between, able to travel like a physical being, but also Mercurial and insubstantial, made of pure energy.

In Spagyric work, whenever anything goes from a liquid to a gas and back again, it is considered a type of reincarnation. The substance has escaped its physical bonds to be etheric for a time, and in that more open state it can better receive the vitalizing energies of the universe. When it condenses again, those energies are a part of it, and with each cycle the charge increases.

This happens both in distillation, and in the circulation that all of our Spiritualized Essence-level Spagyrics undergo in their processing. This spiritualization is a closed process, starting with the extracted herb in the alcohol, usually a green or brown colour, and ending many weeks later, with the Spagyric often changed to red. This time of cycling growth is when the intelligence of the plant becomes a healing force, imbued into the alcohol spirits to be only released again into the person using the final Spagyric.

We hope you are enjoying this continuing look at the three levels of being in our work, and that it gives you insight not just into our Spagyrics, but into nature as well- your own and that around you.

One thought on “Mercury : the Spirit of Spagyrics”