As I posted on Facebook a while back, our winter storms can be intense and difficult to live with, but they also make it possible to sustainably harvest Usnea. The winds blow this lichen off of the trees it grows on, and we often see it flying around in the air for a bit before it lands and I can collect it.

These winds also blow whole trees over, and I collect Usnea from the fallen trees, also, before we cut them up so they can break down and return to the soil as nutrients. Alder trees, especially, have a short life cycle in which they establish quickly in damaged areas, such as after logging or a fire; they then grow quickly and die after just a few years, leaving the soil much improved and more hospitable for the next succession of plants.

When the Alders are still standing and not quite dead, they often become hosts for Oyster mushrooms, a delicious bounty that I look forward to every winter. Once they fully die and drop, though, the main agent of their recycling is Turkey Tail, which is less delicious but very medicinal. 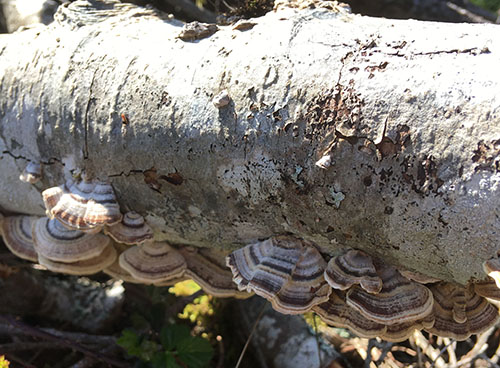 It only takes a few weeks after falling for logs to start showing the beautiful striped fans that give this mushroom their name, and this fruiting will continue until the dry part of summer, or longer in shaded or wet areas, such as one of the Alder logs we have piled up, shown here with a beautiful flush of Turkey Tail.

Turkey Tails grow and spread prolifically when their needs are met, and as they do, they break down lignin, which is the structural tissue in the cell walls of rigid plants, especially trees. They are so good at breaking down lignin that they are being investigated as a biological way of digesting wood to make paper pulp more efficiently and with less toxic waste.

In the forest, Turkey Tail and other lignin-eating fungi create an effect you may have noticed when gathering wood for a campfire. If you have ever picked up a piece of wood that was surprisingly light, and maybe noticed it was white inside and wouldn’t burn well, you have seen the results of the fungal digestion of lignins.

The byproduct of this breakdown of the lignins in wood is the creation of various polysaccharides, which are a class of chemical found in most tonic herbs and fungi, and which has wide-ranging healing properties. As you might expect from the name, plants construct polysaccharides from sugars, and they generally taste sweet because of this. Mushrooms are rich sources of polysaccharides, as are many classic tonic herbs such as Ginseng, Astragalus, Codonopsis, Licorice, and Ashwagandha.

Intuitively, we can sense the tonic nature of these plants through their sweet taste- unlike the bitter alkaloids in herbs that are best for short-term use, these rich and tasty plants and fungi are pleasant to take on a regular basis, and this is the best way to make use of their gifts.

Medicinal Mushrooms like Turkey Tail are especially well-suited for long term use to boost the immune defenses, improve metabolic function, and support and increase overall well-being. Along with Astragalus Root, mushrooms are the most balanced and intelligent support for immunity in particular, boosting immune response to infections and threats without overstimulating it into destructive action. This is because, from an evolutionary standpoint, mushrooms are biologically closer to animals than to plants, and they are subject to many of the same diseases and infections as animals (including us!).

Turkey Tail is especially good for fighting bacterial and viral infection, both directly and by increasing the body’s own defenses. These defenses are boosted throughout the immune system, including white blood cells and macrophages, as well as supporting good bacteria in the digestive system, where much of our immune system is based.

These immune-boosting properties are powerful, and yet also intelligent enough to be used on a daily basis if needed to avoid infectious disease, and even to help the body fight cancer and remediate the effects of chemotherapy and conventional cancer treatment.

This is probably Turkey Tail’s most-studied use, both as a primary and secondary medicine in cancer treatment. Since the 70’s in China and Japan, Turkey Tail extracts have been used in immunotherapy regimes for cancer, and in those treatments and the many studies done on them, it has been shown to directly fight the cancer and improve remission rates, along with lessening the side effects and damage that conventional treatments can cause.

We have heard from many customers who rely on it for less serious issues of immune function and general health, and it seems to be especially good at keeping the immune system in a balanced state in people who tend to allergies, which can create a cascade of over-reaction which can be difficult to heal from.

I wrote about this when we first offered our Shroomtastic formula, which has Turkey Tail as an important component, and I have relied on that formula and Turkey Tail alone to get through allergy season ever since.

When I did have a more serious illness two years ago, requiring surgery and a long recovery, I followed the TCM advice to use Turkey Tail and Astragalus together as a synergistic combination to rebuild blood, restore energy and vitality, and heal damaged tissues. That combination had an immediate lifting effect on my energy and a strengthening Wei Qi quality to it that I’ve experienced whenever I’ve taken it in since then, too.

You can find our Turkey Tail alone as a Spiritualized Essence, as well as in our Shroomtastic and Five Mushrooms Somalixirs, and our Six Mushrooms Essence Formula. And if you’ve tried any of these Spagyrics, let us know what your experience was!