In the first article in this series, I talked about some classic painkilling herbs from our work, looking at herbs that work through opiate-related pathways. In the second article, I discussed herbs that relieve pain by releasing tension, acting as antispasmodics and relaxants and opening tight areas for healing.

For this final article, I will cover the anti-inflammatories, which work in deep and indirect ways, much like the second category, and which can both treat pain in the moment and facilitate better health and function in affected tissues. 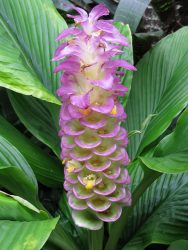 To me, the archetypal anti-inflammatory is Turmeric. This root is well-known as a food and medicine, giving its cheery yellow colour to curries, and its powerful but balanced healing action to a wide range of bodily systems and functions.

Turmeric has been most studied as a tonic and treatment for issues in the digestive and musculoskeletal system, but it also shows powerful healing effects on the nervous system and brain.

Turmeric’s action on inflammation is through the COX-2 pathway, a function also targeted by many pharmaceutical painkillers, but in less intelligent ways, often leading to dangerous side effects, as with the infamous case of Vioxx, an arthritis drug that also led to heart attacks and strokes.

Because Turmeric is a plant, its effects are more well-rounded and balanced, and its reduction in inflammatory compounds in the body does not also suppress the beneficial and healing action of the COX-1 pathway, which protects liver, stomach, and cardiovascular health.

In many trials and studies, Turmeric and its extracts have been shown to be as effective or more so than NSAIDS such as aspirin and ibuprofen, as well as being the equal of many steroidal anti-inflammatories. All of this efficacy comes with beneficial effects to the stomach, liver, brain, and heart, largely due to Turmeric’s very strong anti-oxidant properties. This aspect of Turmeric reduces over-active immune response, so it can also be very helpful for autoimmune inflammation, as with rheumatoid or psoriatic arthritis.

Turmeric was always an essential part of our events and festivals survival kit, for both ourselves and anyone who came to our booth suffering the effects of unfamiliar or bad food, or the strains, pulls, and soreness that come with working at these events. Backs and shoulders sore from setting up a stubborn booth structure, belly and gut tense and unhappy from overindulgence in a delicious rich treat (or a carelessly prepared one), everyone benefited from a dose of our Turmeric Essence, and the relief was usually quick.

For longer-standing versions of these ailments, such as arthritis, bursitis, old unhealed injuries, and digestion that is chronically off, our Turmeric Spiritualized Essence can be taken every day to heal inflammation and allow the body to repair itself and be healthier in the future.

For digestive issues, whether acute or chronic, Turmeric combines well with Hops, whose bitter constituents stimulate the cleansing action of the liver, while the antispasmodic properties I discussed in the second painkiller post relax stomach and intestinal cramps. If it’s joint or muscle pain and inflammation you’re dealing with, Turmeric combines well with Yerba Mansa, our next herb on the list.

Yerba Mansa is an herb we became familiar with when we lived in New Mexico, where it is one of the core native southwestern herbs used in natural healing. Yerba Mansa literally means “herb of the house”, as in, the herb that everyone has in their house, because of its versatility and wide application to many ailments. As Michael Moore put it in Medicinal Plants of the Desert and Canyon West:

Everybody who has lived where Yerba Mansa grows has used it as a medicine.

Yerba Mansa’s basic energy is shrinking, drying, and cooling, making it a classic herb of Saturn. It grows in swampy, boggy, stagnant places, and it addresses conditions with a similar energy- slow-healing or infected wounds, respiratory, intestinal and urinary conditions marked by phlegm and fluid buildup, and so on. For this use, our Yerba Mansa Essence combines well with Yerba Santa and Oshá.

Once you dig it out of its boggy home, its gnarled roots look like bony fingers, and that signature points to another common use- for arthritis and joint pain. The shrinking and drying effect it has on soft tissue swellings and infections also repairs the structure of the connective tissues, so that affected joints are better supported by ligaments, tendons, and muscles. At the same time, it has a strong aspirin-like painkilling effect, so even though the true healing may take some time, relief is found right away.

Our final herb, Black Cohosh, is one I discussed in part one of this series, with the classic painkillers that work through opiate-like action, as it is thought that this pathway is how Black Cohosh brings cool and calm to ease hot flashes. In my second post, I mentioned that Cohosh could also go on the antispasmodic and relaxant list, as it has a great effect on menstrual cramps by both relaxing them in the moment, and bringing hormonal balance that prevents them overall. For these uses, our Black Cohosh Essence seems to be the best level of Spagyric.

Now, making its third appearance as a painkiller, I’d like to discuss Black Cohosh again, but this time, as a Spiritualized Essence. This level of Spagyric is a more concentrated extraction, and is also targeted to the Spirit level of being, which is the level of the emotional and mental being, as well as carrying the tonic aspects of plants.

Black Cohosh at this level has a pronounced anti-anxiety energy, acting in a balanced calming but uplifting way. It has a stronger affinity for the nervous system, and as a hormone balancing anti-inflammatory with aspirin-like compounds, it all comes together in a lovely remedy for pain that is linked to hormonal imbalance, emotional or nervous conditions, and any other imbalance that links mind and body in cause or effect.

For this aspect, it combines well with our Bleeding Heart, which I also talked about in the first article, and which also works as a calmative to emotional and physical pain, especially unreleased grief. Black Cohosh’s nerve tonic properties are synergistic with Scullcap, which nourishes the physical tissue of the nerves, and is also anti-inflammatory and easing to physical-emotional pain.

I hope you’ve enjoyed this series and found it informative and interesting- thank you for reading!