Our customers often ask about the three levels of Spagyric that we offer- what is the difference between them, why are some herbs at one level and not another, and how to pick the best level for healing goals? We’re used to thinking about plants in the way that we do, but we also know that it’s a complex system at first, and there is some learning curve involved. So we came up with a sale that also illustrates the different ways our Spagyric work can refine and target a plant’s effects to different levels of being and diverse healing needs.

Our Essences are our basic Spagyric, made in a 3 month process with the alcohol extract and the mineral salts added back in. Essences work on the Salt, or physical level of being of organs, systems, and functions, useful for short-term imbalances and support.

Spiritualized Essences, which also includes our Veriditas Initiatics and our eroSoma Nectars, are created in a 7 month process, and are more concentrated and refined, and also undergo a process of Spiritualization. This circulation opens the extract to receive vital energy and also marries the plant’s being back together at the Mercury, or Spirit level, targeting the meridians and energy flows of the body.

Magisteries take a year to make, and focus on the essential oils, which are the Soul of the plant and their expression of highest purpose, connected to the planetary archetype they are ruled by. This archetype carries healing intelligence in a larger context than just a single plant’s effects, and connects to the Sulfur, or Soul of the person using it.

Some plants express their healing well at one level, but not another. Many plants have something to offer at two levels of Spagyric, and a very few are equally intelligent at the Body, Spirit, and Soul levels of being. Our experience working with plants in healing and in our lab informs us about which level or levels will best bring out what a plant has to offer, and this is why so many of the plants we work with are not available in all three Spagyric types.

Echinacea is a well-known healing herb, the root of which was used as a remedy against venoms and poisons by the plains nations of the US. Settlers learned about it from them, and the Eclectic physicians in particular popularized its use. It is a lymphatic tonic and now is more widely known as an immune booster, used to fight infections of all kinds. Our Echinacea Essence is a great immune booster in this way, helpful at the onset of a cold, flu, or other viral illness, helping the body by stimulating immune response and defenses.

Our Echinacea Spiritualized Essence is a higher expression of this plant’s gifts, made from roots grown for years in a friend’s organic garden. These older roots had such a wise energy to them, we wanted to see what the Spiritualized process would bring out, and we were very happy with the results! Our Echinacea Spiritualized Essence is very “buzzy” in the mouth, a sign of its immune-supporting chemistry which interacts with cannabinoid receptors. This makes it an unexpectedly great remedy for pain, and we also feel it’s a tonic for more long-term infections and invasions of the body.

Even more distinct in effect are our Ashwagandha Spagyrics. Among my favourite herbal tonics, Ashwagandha is a true adaptogen, helping the body respond to stresses of all kinds. It is renowned as an energy tonic, bringing vitality and strength, and this is the aspect brought out in our Spiritualized Essence. Sweet from the root, but also slightly bitter from the leaves we also used, it’s a zippy pick-me-up that will brighten the mood and energy without overstimulation.

Ashwagandha is also a calmative, which can be seen in its botanical name, Withania somnifera. Somnifera means “sleep-inducing”; you might recognize this word from Papaver somnifera, or Opium Poppy. Ashwagandha is not a narcotic, but it does calm the adrenaline in the body and bring deep sleep and balance to the sleeping-waking cycles. For this use, we suggest our Essence of Ashwagandha, which is sweet and food-like from just the root, and which can be taken at bedtime for restorative sleep and a refreshed morning.

Sometimes the variations in our Spagyrics are not just from the processing, but also from the difference in the plants themselves. There are many herbs we work with which have different uses depending on the exact species, the part used, or even the time of harvest as in the case of Ginkgo. 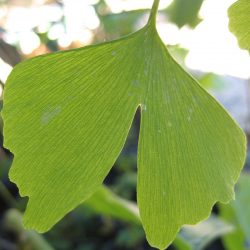 Our Ginkgo Essence and Green Ginkgo Spiritualized Essence are both made from the green summer leaves of this ancient tree. Both are stimulating to the circulation throughout the body and especially to the brain, mostly because of Ginkgo’s blood thinning effects.

Ginkgo Spiritualized Essence is more stimulating to the mind and thought, quickening and sharpening mental function. It’s also the one we consider more of a long-term tonic to the structure and function of the brain. The Ginkgo Essence has a more full-body effect on circulation, useful for poor blood flow in the extremities, and also as a tonic to sexual vitality in men and women.

Waiting to harvest until autumn, Ginkgo becomes a different medicine altogether as the breakdown of the leaves lowers the stimulating terpenoids, but increases the antioxidant flavonoids. This makes our Autumn Ginkgo Spiritualized less stimulating to the mind and thought, more grounding and centering, and likely more protective to the whole body long term.

Astragalus is another well known herb of Traditional Chinese Medicine, which can be targeted for effect- this time, aiming at physical health or spiritual use, depending on what part is used.

For our Astragalus Essence and our Spiritualized Essence, we use the root, a sweet-tasting immune booster with a balanced intelligence. In TCM, Astragalus is understood to be supportive to the Wei Qi, the layer of energy around us, just above and outward from the skin. The Wei Qi protects us from “external pernicious influence”, which can be seen as anything from the environment that can enter our systems and affect our health.

These influences can be microbes such as bacteria or viruses or allergens such as pollen or pollution, which is the level of protection our Essence is best at, for short-term use to fight off imminent imbalance.

External pernicious influence can also be subtle energies carrying harm, seen in TCM as restless spirits or bad intent from other people. Our Spiritualized Essence of Astragalus is like a shield against these types of invasions, and is also helpful for the more mundane infectious ones if long-term support is needed.

Turning that protection inside out, Taoist spiritual healing uses the seed of Astragalus to support people who “leak energy”. In these cases, it’s not an external quality that is invading the inner self, but one’s own vitality that is being drawn off by poor energetic containment, needy people, or other draining situations. Our Astragalus Seed Initiatic is a valuable ally for people who become tired when around crowds, or in situations such as healing work, where the healer’s energy can be lost to the patient. It’s also a good adjunct to tonic Spagyrics such as Ginseng, to build a container for their effects to build within.

Finally, we arrive at plants which reflect similar qualities across different species, each with its own spin on what its family offers.

Valerian is a popular sedative herb, reliably calming and sleep-inducing, depending on dose. Our Valerian Essence is made from the European variety, the most commonly-used type, and the most heavy in energy. It will put most people down for a long sleep, and it’s also a good painkiller and anti-spasmodic to the muscles and digestive system. It can be slowing to thought and give a bit of a hangover in large doses, but for dealing with a short bout of insomnia, it’s a great funky-tasting choice.

Valerian’s American relative from our area, Northwest Valerian has the same musky taste, and it is also calmative, but it’s paradoxically clarifying to thought and mental function. If you find that mental tension creates chatter that makes you edgy, sleepless, and befuddled, our Northwest Valerian Spiritualized Essence can help settle the thoughts, still the worries, and leave you calm, clear and focused.

My personal favourite of the Valerian tribe is Jatamansi, the Indian root used in Ayurvedic healing and spiritual practice. Jatamansi is the Spikenard of the Bible, used by the Magdalene on Yeshua’s feet, as it has a gift of calming the mind and heart and dispelling doubt and fear. In meditation, our Jatamansi Initiatic calms the thoughts and brings mindful contemplation, whether in sitting practice or daily life. It has a cooling energy to the brain and its functions, and I find that it is an excellent sleep tonic which also enhances and deepens my dream life.

The saying might be “a rose is a rose is a rose”, but our work has shown us differences in how this beautiful flower expresses itself in different cultivars. So far, we have worked with pink and red Damask roses, and each has its own intelligence and gifts.

Red Rose is the one we use for our eroSoma Nectar, and it is the most physically supportive and healing of the two, a tonic to the female organs and their functions, and an astringent and anti-microbial for the whole system. Energetically, the red rose carries a mature, womanly energy, confident and strong, and it is this quality it brings to our Divine Feminine Somalixir.

Our Venus Magistery is made of Pink Roses, sweet and aromatic with their classic heart-opening scent. A light, playful, girlish energy is their signature, healing on its own and as an important aspect of our Heart Opener Somalixir. Love in all its forms is the gift of this Rose, helping you move through the world connected to your heart and its highest purpose. And who doesn’t need more of that in their life?